"The Wizard Of Oz" To Debut At Pantages Theatre 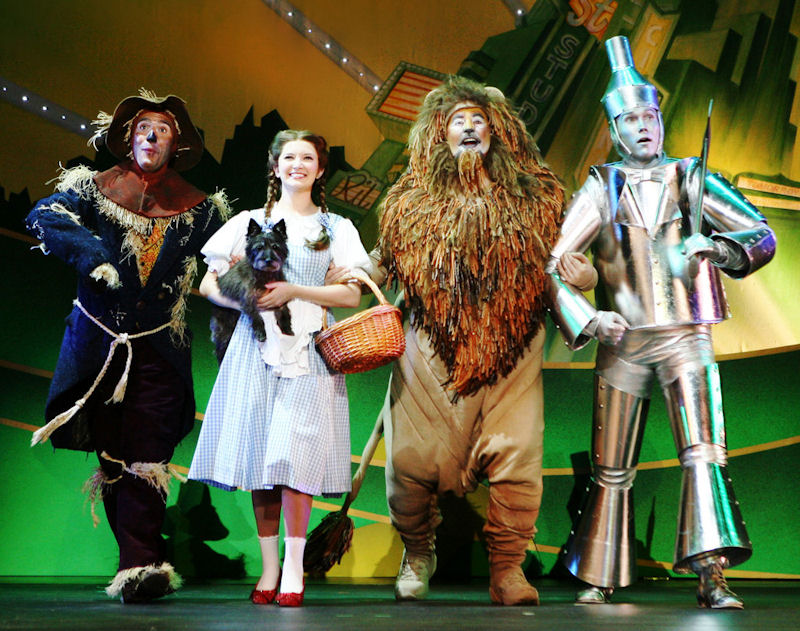 The Wizard of Oz is coming to LA! Producers Bill Kenwright, The Really Useful Group, David Mirvish, Troika Entertainment, Warner Bros. & The Nederlander Organization are proud to announce that the first North American tour of the new stage adaptation of THE WIZARD OF OZ will make its L.A. debut at the Hollywood Pantages Theatre for a limited 3 week engagement; September 17 – October 6, 2013.  Full casting for the tour is now complete.

Individual tickets for THE WIZARD OF OZ may be purchased online at www.HollywoodPantages.com or www.Ticketmaster.com or by phone at 1-800-982-2787.  Tickets may also be purchased in person at the Pantages Box Office and all Ticketmaster outlets.  The Pantages Theatre is located at 6233 Hollywood Boulevard, just east of Vine Street, and the box office opens daily at 10am except for holidays.  Currently, THE WIZARD OF OZ is still available as part of a Classic Pantages Season Package through August 28th online at the official Hollywood Pantages website or by calling the Season Ticket Office at 866-755-2929 (Mon-Fri 9:30am – 5:30pm).

The North American tour will feature many of the same cast currently starring in the Toronto production including, as previously announced as Dorothy, Danielle Wade, who was chosen by the Canadian public through CBC TV's “Over The Rainbow.”  Starring opposite Danielle is one of Canada’s most respected and honored actors: Gemini-winner, film and theatre veteran, Cedric Smith as The Wizard.

Actor and choreographer Mike Jackson (Chicago, Broadway/U.S. tour; Contact, U.S. tour) plays the Tin Man.  Star of Mamma Mia! (Toronto/U.S. tour) and a Dora Award winner for his play High Life, Lee MacDougall plays the Lion. Jamie McKnight, known for his performance in The Producers (Toronto) and as one of the Canadian Tenors, plays the Scarecrow. Robin Evan Willis, star of many Shaw Festival productions, plays Glinda.   Joining the cast as the Wicked Witch of the West is Broadway and national tour veteran Jacquelyn Piro Donovan (Les Mis, Miss Saigon, How the Grinch Stole Christmas, Closer Than Ever).

Developed from the ever popular MGM screenplay, this new production of THE WIZARD OF OZ contains all the beloved Harold Arlen and E.Y. Harburg songs from the Oscar®-winning movie score, all the favorite characters and iconic moments, plus a few surprises along the way, including new songs by Tim Rice and Andrew Lloyd Webber.

THE WIZARD OF OZ had its North American premiere on December 20, 2012 in Toronto, ON, at the Ed Mirvish Theatre, where it continues to play through August 18, 2013.

The performance schedule for THE WIZARD OF OZ is Tuesday through Thursday at 7:30pm, Friday at 8pm, Saturday at 2pm & 8pm, and Sunday at 1pm & 6:30pm.  Opening Night is Wednesday September 18th at 7:30pm.

THE WIZARD OF OZ has a running time of 2 hours and 20 minutes including intermission and is recommended for ages 5 and up.  (Please note that in consideration of audiences, no one under 3 will be admitted to the theatre.)

Orchestra level tickets for THE WIZARD OF OZ start at just $25.  Prices are subject to change without notice.

For more information on THE WIZARD OF OZ, please visit www.WizardOfOzTheMusical.com.

For tickets or more information about the Los Angeles engagement of THE WIZARD OF OZ, please visit the Pantages Theatre’s official website, www.HollywoodPantages.com.

Lifestyle
In NYC For The Summer?