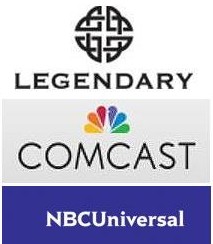 Universal Pictures andLegendary Entertainment have announced that they will enter into a multi-year film partnership in which the two companies will produce and co-finance Legendary and Universal films with Universal distributing Legendary films worldwide.  Making Universal its new home enables Legendary to not only leverage the power and success of Universal's film business and theme parks, but also the cross promotional support from NBCUniversal and Comcast assets through the company's "Symphony" program.  The announcement was made today by Universal Pictures Chairman Adam Fogelson and Co-Chairman Donna Langley and Legendary Entertainment Chairman and CEO Thomas Tull.

"Comcast and NBCUniversal's global assets in film, television and theme parks offer Legendary unmatched breadth and opportunity to grow our business.  We are delighted to be in business with this exceptional team and look forward to a successful partnership," said Tull.

Universal and Legendary's film partnership is a complementary arrangement for both companies.  Legendary, which is known for producing and financing successful large scale films, will continue to create and finance tent pole films based on intellectual property that is uniquely appealing to the coveted fanboy audience.  And Universal, which has a proven track record of turning films of all shapes and sizes into hits with special skills in growing and nourishing original franchises, will market, co-finance and distribute Legendary films for five years beginning in 2014.