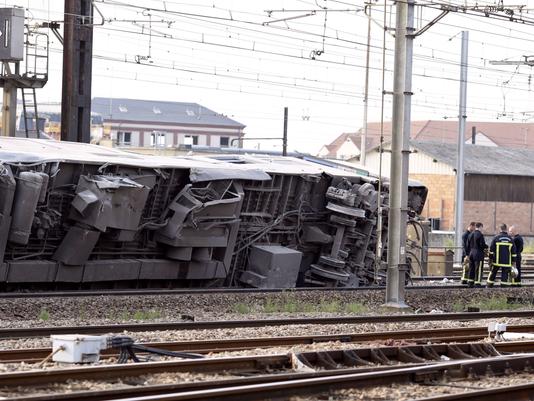 Seven people are believed to be dead and dozens injured after a passenger train in Paris skid off its rails on Friday. The train cars slammed into each other and overturned.

The head of the SNCF rail authority is calling this a "catastrophe." Investigators are currently seeking the cause for the crash.

The SNCF said the train was carrying some 385 passengers when it derailed Friday evening at 5:15 p.m. and crashed into the station at Bretigny-sur-Orge, some 12 miles south of Paris. The train was headed from Paris to Limoges.

As reported by USA Today, a passenger speaking on France's BFM television said the train was going at a normal speed and was not meant to stop at Bretigny-sur-Orge. He described children unattended in the chaotic aftermath. He said there are swarms of emergency workers at the scene.

Two train cars, cars number 3 and 4, initially derailed, then knocked the other cars off the track, SNCF chief Guillaume Pepy said. "Some cars simply derailed, others are leaning, others fell over," he said.

L. A. Glam
Go Behind The Scenes With Carly Rae Jepsen & Candie's