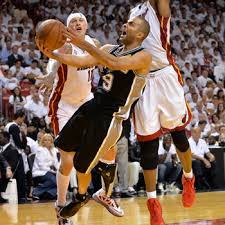 The “Over-The-Hill-Gang,” better known as the San Antonio Spurs, have taken game 1 in the best-of-seven series for bragging rights to the NBA Championship title. The Spurs defeated the defending champion Miami Heat 92 to 88 Thursday night at American Airlines Arena in South Beach, FL. After a ten-day layoff — because of the quick dismissal of rivals the Memphis Grizzlies in the Western Conference Finals — the Spurs didn’t miss a beat and resumed their quest for a fifth NBA title for the franchise. 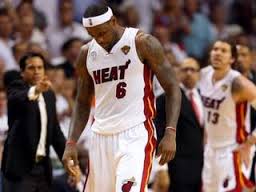 The Spurs executed on both ends to a ridiculously effective degree, turning the ball over just four times over 48 minutes against what was a typically-active and lengthy Miami Heat defense. San Antonio missed 16 of its 23 three-pointers, but several of those looks were wide open attempts, while the Spurs’ spacing seemed purposeful and potent despite the relatively-low 92-point output. The last second heroics of point guard Tony Parker sealed the deal, when after some Curly Neal-Globetrotter-like dribbling finally ended with an acrobatic19-foot bank shot that just cleared his fingers as the shot clock expired. After the referees’ reviewed the play on the playback monitors, the basket was counted and the Spurs held a four-point lead with 5.2 seconds left in the game. Without the miracle of a four-point play, the Heat was faced with going down one game to none in a series that uses the 2-3-2 format. Meaning that the Spurs get the 3 middle games on their court instead of the traditional 2-2-1-1-1 format that is used in all of the series before the finals. After a failed layup attempt, the time expired and the Spurs are now 3 wins away from a championship. Game two will be played Sunday in Miami at 8 pm ET on ABC.