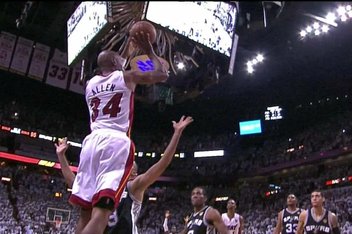 Back and forth. That has been the story of this series since game one. The losing team has come back to win every time in the following game. The Miami Heat staved off elimination when Ray Allen hit a 3-pointer with five seconds remaining in regulation, tying the score and going on to win in overtime 103 to 100. The Spurs could not answer on their final possession and had to play five more minutes to try to get the job done. Kawhi Leonard had a chance to all but ice the game when he missed the first of 2 free throws with less than 20 seconds left. Making both free throws would have given the Spurs a 4-point lead where a 3-point basket doesn’t tie or win the game. That set up the scenario for Allen’s miracle 3-pointer to keep the Heat’s chances of a repeat alive. Overtime came down to the final play as well. Down one, the Spurs had a chance to take the lead again. 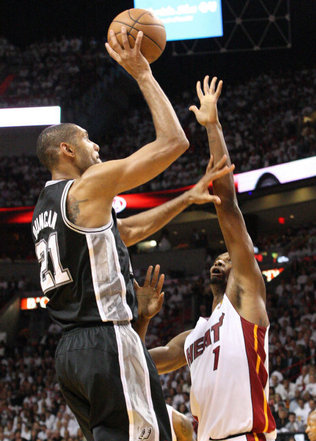 Manu Ginobili appeared to get hit as he drove the lane in the final seconds and turned the ball over before Allen sank two free throws to extend the lead to three points with 1.9 seconds remaining. On the next play, Danny Green tried to get off a desperation three-pointer that Chris Bosh blocked to secure the win. Tim Duncan had his best game of the series scoring 25 points in the first half, but only scoring 5 in the second to end with 30 points. Tony Parker finished with 19 points and eight assists. LeBron James finished with 32 points on 11-of-26 shooting, and added 11 assists and 10 rebounds to notch a triple-double. James’ dribble penetration and the attention he drew in general freed up Mario Chalmers to finish with 20 points on 7-of-11 shooting. With the series tied 3-3, the “winner-take-all” game 7 will be played Thursday night at 9 PM ET.