Jimmy Takes Over For Jay On NBC 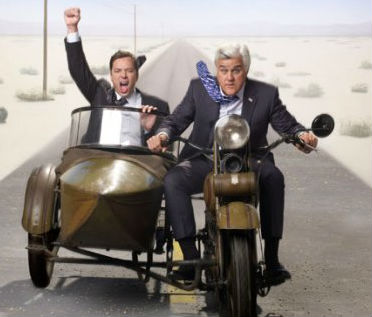 It's official: Jay Leno, longtime host of NBC’s “The Tonight Show with Jay Leno,” announced today that he will wrap up what will be 22 years of headlining the iconic late-night show in Spring 2014. And yes, the rumors are true... Jimmy Fallon will transition into new hosting duties on “The Tonight Show” franchise after Leno concludes his successful run. “I’m really excited to host a show that starts today instead of tomorrow,” Fallon said.

As part of the transition, “The Tonight Show” will be returning to its original home in 30 Rock in New York and will be executive-produced by Emmy Award winner Lorne Michaels (“Saturday Night Live,” “30 Rock”). Programming plans for the 12:35 a.m. (ET) time period currently are in development and will be announced soon.

Leno said, “Congratulations Jimmy.  I hope you're as lucky as me and hold on to the job until you're the old guy. If you need me, I'll be at the garage.” Leno has hosted “The Tonight Show with Jay Leno” since taking over the reins from television icon Johnny Carson in 1992.

FYI
Jay-Z & Beyonce Visit Cuba: Was It For Business Or Pleasure?

Television
TV Review: "Bates Motel" Gets To The Heart Of The Psycho