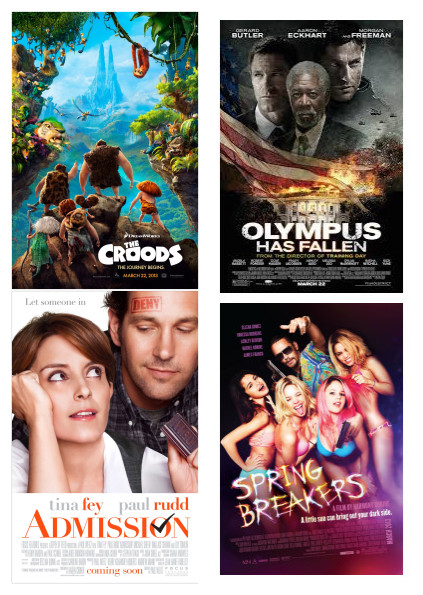 For the first time in film history, two of comedy’s hardest hitting heavy weights team up for a dramatic comedy about one of the worst times in every high schooler’s academic career: college admission season. Tina Fey (30 Rock) stars as a Princeton Admissions Officer, who is given an unexpected surprise when she reconnects with one of her former college roommates, played by Paul Rudd (This is 40).

‘Kids’ screenwriter Harmonie Korine takes the director chair in ‘Sping Breakers’, the most ridiculous, over the top Spring Break movie in recent memory. The film follows four college students – Selena Gomez, Vanessa Hudgens, Ashley Benson, and Rachel Korine – as they transform from hard working students to terrorizing convicts after deciding to embark on the best Spring Break vacation ever with a gangbanging rapper played by James Franco. For most students around America, Spring Break lasts for a week, but for these four girls, Spring Break lasts forever. http://www.springbreakersmovie.com

In this animated family film from ‘How to Train Your Dragon’ director Chris Sanders follows mankind’s very first family, as they take to the road after the cave they have called home forever is destroyed. Nicholas Cage, Emma Stone, Ryan Reynolds and Catherine Keener star in Dreamworks latest animated film. http://www.thecroodsmovie.com

After terrorists launch a full fledged attack on the White House, disgraced former Secret Service guard Mike Banning (Gerard Butler) finds himself trapped in the same place that threw him out not too long ago. With nothing but his fists and expansive knowledge of the inner workings of the nation’s most iconic white building, Banning sets out to rescue the President from the insidious grasps of the group of no-good evildoers that kidnapped him. http://olympusmovie.com