TV Review: "Bates Motel" Gets To The Heart Of The Psycho 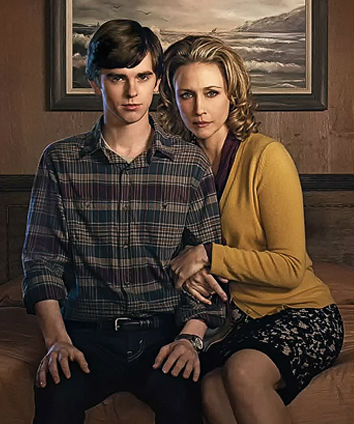 Acting as a prequel to the genre-defining film "Psycho," A&E's "Bates Motel" does justice to the terrifyingly classic story Alfred Hitchcock made over fifty years ago. This suspenseful series takes us back to Norman Bates' adolescence, where we learn why he's in fact so psychologically disturbed. Blame it on the mother. Set in present day, it begins just as Norman discovers his father dead on the floor of their garage. His mother Norma decides to run away and start a new life. She buys a motel on the outskirts of the idyllic coastal town of White Pine Bay. As mother and son get ensconced in their new home, they discover the town isn't quite what it seems, and the locals aren’t so quick to let them in on their secrets. But the Bates’ are done being pushed around and will do whatever it takes to survive – and will do  whatever it takes to protect their own secrets.

Or more like, Norma will do whatever it takes to keep her son by her side.

The cast is phenomenal. 21 year-old Freddie Highmore (See LATF The Magazine's earlier interview with Freddie HERE) is perfect as Norman. He shines as the vulnerable and awkward teenager who tries so hard to fight the dominant mother, played by Oscar nominee, Vera Farmiga. Just the psycho stare in her eyes in the very first scene proves that crazy is something Farmiga plays very well. The show also stars Max Thieriot (“Disconnect”), Olivia Cooke (“Blackout”) and Nicola Peltz (“The Last Airbender”), Nestor Carbonell (“Lost,” “The Dark Knight Rises”) and Mike Vogel (“Pan Am”).

Bates Motel is produced by Carlton Cuse (“Lost”) and Kerry Ehrin (“Friday Night Lights”). LATF deems this A&E series a must see this Spring. The well directed dark tale is filled with suspense, grit and hard-to-watch moments. But, as much as you want to turn your head away from the horror, you'll keep coming back for more stabs.