Robots Star In "The Tragedy of Macbeth" 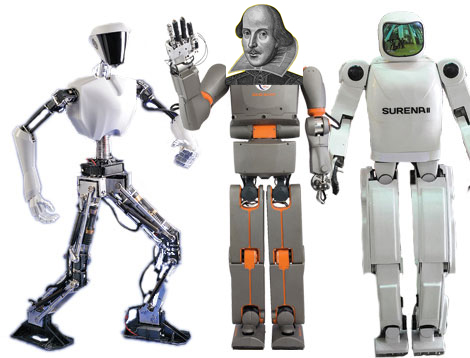 Did you know The Robot Shakespeare Company produces animated Shakespeare plays with sci-fi robots playing all the characters? Their first release, "The Tragedy of Macbeth", aims to get kids interested in the Bard by appealing to them on their own terms... digital-age style.

The 90 minute movie uses the original text of the play, as written by Shakespeare, and animates it using robots, spaceships, and all the sci-fi trappings.

"Shakespeare can be intimidating," says producer Dan Gallagher. "That's especially true for newcomers.  Most productions take for granted that the audience knows the material.  What we want to do is to tell the story as Shakespeare wrote it, but present it in a way that anyone can follow.  That's why we include the modern subtitles."

"Using CGI robots is a kind of visual shorthand," Gallagher continues. The Company raised their funds on Kickstarter in the summer of 2011.  Once the fundraising goal was hit, production got under way.  All of the software used for the production was open source.  The sound was done in Audacity, the texture images done in GIMP, and the animation itself done in Blender.

"The Tragedy of Macbeth" is available on Amazon.com, and can be viewed streaming on the Robot Shakespeare Company website, with educational and production notes for each scene. www.robotshakespearecompany.com