Proposition 8: What Will The Ruling Be? 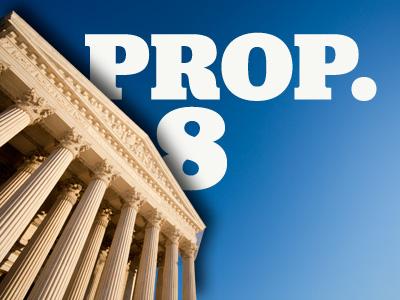 Today the United States Supreme Court will decide on the controversial Proposition 8, which voters approved in 2008 to ban same-sex marriage and states that only marriage between a man and a woman is valid or recognized in California. As crowds of protesters wait outside with their painted signs, reports are coming out from the inside. It seems the justices are closely split on gay marriage.

Swing vote, Justice Anthony M. Kennedy raised concerns about the court entering "uncharted waters" on an issue that divides the states and suggests that the court should strike down California’s ban on same-sex marriage without ruling broadly on the issue. According to Reuters's updates from inside the court house, the U.S. Supreme Court completed more than an hour of oral arguments this morning over Prop 8. The court's nine justices may rule by the end of June on whether the law may stand. As of now, the court is reluctant to make a united ruling.

Kennedy even raised the prospect of the court dismissing the case. In a similar vein, Justice Samuel Alito also urged caution, noting that gay marriage as a concept is "newer than cellphones and the Internet."

None of the justices indicated support for the Obama administration's favored solution, which would strike down Proposition 8 and require the other eight states that already recognize civil unions or domestic partnerships to allow gays and lesbians to marry.

Sports
NY Judge Has A No Prescription Plan For Plan B

Sports
Shocks In Sports Across The Board

FYI
United & Boeing Work On Better Wi-Fi In The Sky