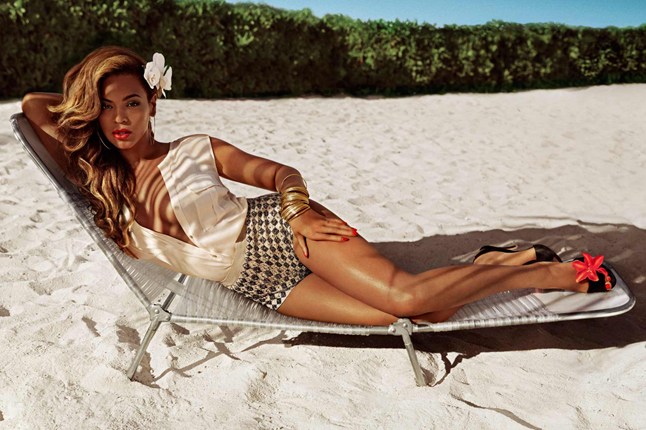 Superstar Beyoncé will be the new face of H&M’s summer campaign. Not only will her photos appear in Magazines, Newspapers and her voice will blast the airwaves, but now we will be admiring beautiful poster ads where she will be wearing pieces from the H&M summer collection inspired by her style. It was shot on the beaches of the Bahamas and features both a print campaign and a commercial.

“I've always liked H&M's focus on fun and affordable fashion. I really loved the concept we collaborated on to explore the different emotions of women represented by the four elements -- fire, water, earth and wind. It was a beautiful shoot on a tropical island. It felt more like making a video than a commercial,” says Beyoncé.

Per their PR Department, Beyoncé has worked with the in-house design team at H&M to create the perfect pieces for the heat of summer. Included in the collection are also garments – among them a tie-dye bikini – 25 percent of sales of which will be donated to H&M for Water. H&M’s initiative with WaterAid has so far raised £2,650,000 since 2002.

The campaign images were shot in Nassau, Bahamas by photographers Inez van Lamsweerde and Vinoodh Matadin, while the commercial was directed by Jonas Åkerlund and is shot like a music video. It will be available to view online in its entirety, with edited versions for TV. www.hm.com

In addition to launching the summer line, busy Beyonce will kick off her world tour on April 15th in Serbia and end in Brooklyn, NY on August 5th.

Lifestyle
Come Fall, Sofia Vergara Could Be In Your Living Room

Music
fun.'s New Video Has Us Asking "Why?"