And The Winners Of The Orange Blimp Are... 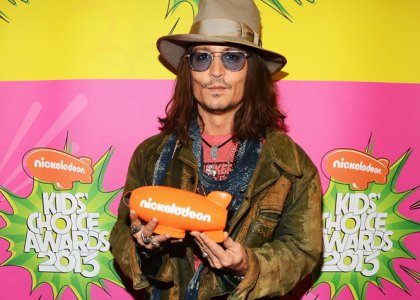 Mega-stars including Katy Perry, Selena Gomez, Justin Bieber, One Direction, Kristen Stewart, Dwayne Johnson, LeBron James and the favorite Johnny Depp reigned as this year’s favorites, winning top honors at last night's Nickelodeon’s 26th Annual Kids’ Choice Awards. Hosted by the biggest kid in Hollywood, Josh Duhamel, the awards were broadcast from the Galen Center at USC in Los Angeles where kids honored their favorites from the worlds of film, music, sports and television.  This year, a record-breaking 387 million votes were cast around the world in 22 categories.

In the spirit of the star-studded slimefest, Duhamel kicked off the celebration by singing a special Kids’ Choice Awards version of Pitbull’s smash hit “Don't Stop the Party,” as he made his way from the dressing room to the main stage.  Experiencing a series of random celebrity encounters along the way, Duhamel thumb wrestled with Mike “The Miz” Mizanin, was tackled by Jerry Trainor dressed as a Yeti, wore the same dress as Fergie, scatted with Steven Tyler and played an elaborate game of Rock Paper Scissors with Megan Fox, only to be transformed into Pitbull himself at the end.

Favorite Song
“What Makes You Beautiful” (One Direction)

Television
Who Will Get Slimed At Nickelodeon's 26th Annual Kids' Choice Awards?