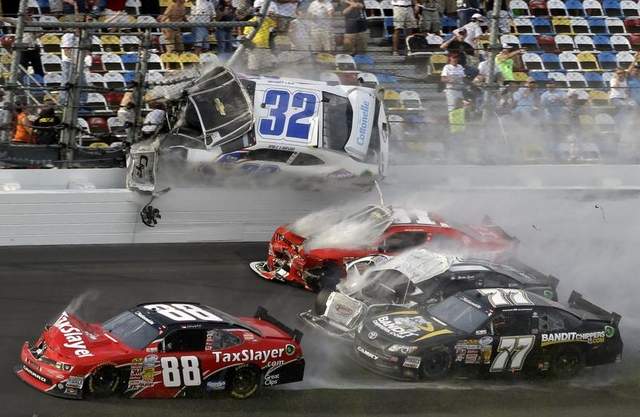 It looked like a flashback to the April 2009 crash at Talladega Superspeedway when Brad Keselowski's race car crashed into Carl Edwards' car -- flying into the grandstand fence. Today at least 28 people were injured after pieces of race cars flew into the stands at Daytona International Speedway during a 12-car accident in the final laps of the Drive4COPD 300 Nationwide race. Speedway President, Joie Chitwood stated that 14 people were transported to hospitals in the surrounding area, while 14 others were treated by medical personnel at the speedway property. Two fans are reported to be in critical condition.

The horrific wreck began as the field closed in on the finish line and sent rookie Kyle Larson's car sailing into the fence that separates the track from the seats. Fortunately, Larson walked away from the crash without any serious injuries. The driver said, "I hope all the fans are OK and all the drivers are all right -- I took a couple big hits there and saw my engine was gone. Just hope everybody's all right."

Chitwood said he was confident the track would be repaired in time Sunday for the Daytona 500.