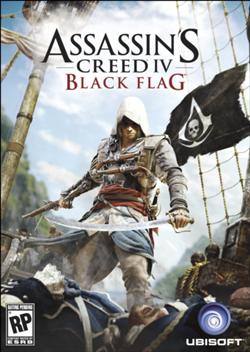 Ubisoft® announced that Assassin’s Creed® IV Black Flag™, the latest installment of the award-winning franchise set in the gritty and exotic Golden Age of Pirates, leaps into the next-generation of video games and is now available on PlayStation®4 computer entertainment system in North America – rated M for Mature.

This is thefirst Assassin’s Creed game leveraging the power of next generation consoles, making this the most beautiful chapter of the franchise to date. On PlayStation 4, gamers will be able to use Remote Play to stream Assassin’s Creed IV Black Flag to their PlayStation® Vita handheld entertainment system via WiFi, freeing up the television for other uses.

For a limited time, when gamer buy the disc or digital version of Assassin’s Creed IV Black Flag for PlayStation 3 they can download a PlayStation 4 digital copy from the PlayStation Store for a discounted price.

Assassin’s Creed IV Black Flag tells the story of Edward Kenway, who falls from privateering for the Royal Navy into piracy as the war between the major empires comes to an end. Edward is a fierce pirate and a seasoned fighter who soon finds himself embroiled in the ancient war between Assassins and Templars. Set at the dawn of the 18th century, the game features some of the most infamous pirates in history, such as Blackbeard and Charles Vane, and takes players on a journey throughout the West Indies during a turbulent and violent period of time that becomes known as the Golden Age of Pirates.

And for the latest on all of Ubisoft’s games, visit the UbiBlog: http://www.ubiblog.com

Electronics
"Tomb Raider" Heads To Xbox One And PS4