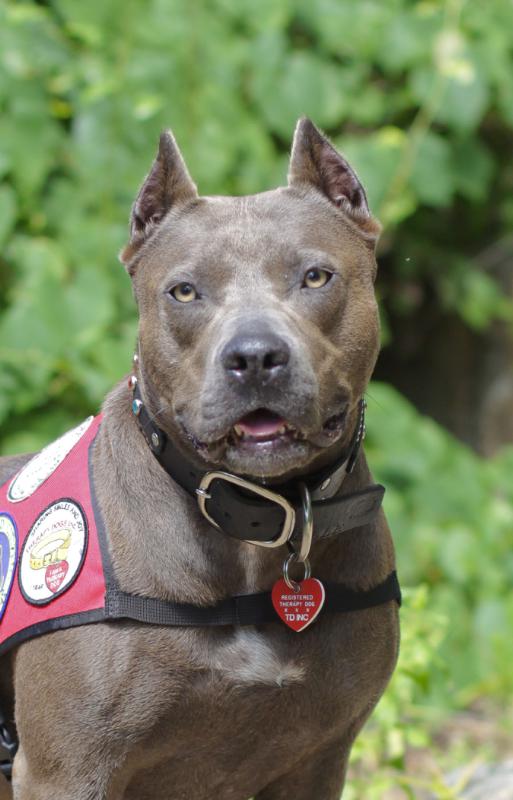 The nation's top therapy dog, a pit bull named Elle (pronounced Ellie) from Roanoke Rapids, North Carolina who helps teach children about dog safety, reading, and overcoming prejudice and stereotypes – something a pit bull knows too much about – has been named this year's "American Hero Dog" at the 2013 American Humane Association Hero Dog AwardsTM.

Elle and her human companion Leah Brewer were presented with the nation's top honors last night at the star-studded Hero Dog Awards gala at the Beverly Hilton Hotel in Los Angeles. The awards are presented by the Lois Pope LIFE Foundation, Inc., broadcast nationally on Hallmark Channel, and produced by Emmy® award-winning MRB Productions.

Elle is saving lives by teaching children dog safety (more than 2 million children are bitten by dogs each year) and making positive life changes for people by helping them overcome their fear of dogs. Since becoming a volunteer, Elle started a therapy dog reading program called "Tail Wagging Tales," helping children enjoy books and improve their reading skills. Elle is also making a difference by creating happiness all around while visiting her friends at an elementary school, a middle school, and a retirement home. Elle also reaches out to educate families about being responsible pet parents, sharing stories about her job as a therapy dog, and spreading positive awareness about dogs that are misunderstood, including pit bulls. This year's therapy dog category sponsor, as well as the online sponsor, is the leading animal health company, Zoetis. Elle's charity partner, which will receive $6,500 in financial support from the Hero Dog Awards, is the nonprofit organization, Hand in Paw.

The Hero Dog Awards were created to celebrate the powerful relationship between dogs and people and recognize extraordinary acts of heroism performed by ordinary dogs. The event will be broadcast nationwide by Hallmark Channel on October 30 at 8 pm/7 Central. The 90-minute program will air as part of Hallmark Channel's Pet Project, the network's cross-platform advocacy campaign designed to celebrate the joy and enrichment animals bring to our lives.

During a nationwide search over the course of six months, 141 dogs from all across the country were nominated and more than a million votes were cast by the American public, culminating in the selection of eight extraordinary canine finalists.