NFL: Denver Leads & You Can Stream The Games 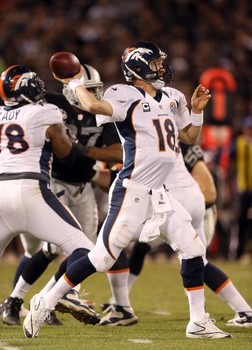 A year ago the Broncos were coming off a playoff run in which they pulled off an upset win over the Steelers in the wild card game. It's now 2013, and Denver is among the most dominant teams in the AFC with Peyton Manning at the helm. The 37-year-old is off to a spectacular start, as the 16-year veteran has passed for 1,884 yards, 20 touchdowns, and just 5 interceptions. Denver leads the NFL in points scored, total yards and passing yards per contest.

If you don't have the big flatscreen, you can stream the games for the rest of the season!
Watch Online: http://Live-Football-Pass.comView streaming NFL games and enjoy live NFL streaming in High Quality.

Live-Football-Pass enables fans to watch NFL football online and get live NFL games. Fans can view each and every game of the season and follow games all season long.