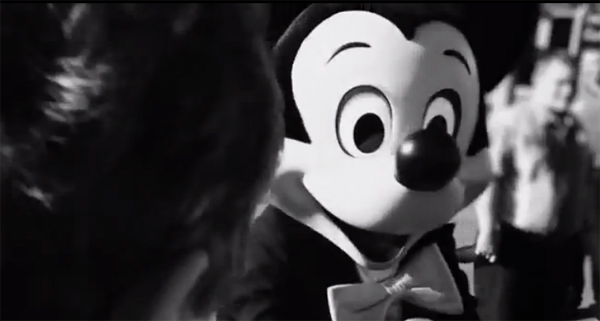 The Walt Disney company is well known for keeping their copyrighted material tightly secured from the public eye. That’s what makes “Escape From Tomorrow” so interesting. The majority of the movie takes place at Disneyworld, their famous Florida theme park. Almost entirely filmed on their premises, Randy Moore never received any kind of clearance from their legal department. They may not have minded having a fully produced movie shot on site, however the subject matter of the film is dark, crude, and sometimes even vulgar. First time writer director Randy Moore and his crew got away with it by posing as tourists with Canon 5D Mark II cameras, and using their smart phones for basically everything else. Even though the cast and crew had to dip and dodge the park security, they succeeded in producing  an entire feature length film guerrilla style.

The movie starts off with a wonderfully composed score, and a point of view shot on a roller coaster going in and out of tunnels, only to be cut short abruptly by a decapitation. One moment it is an innocent family vacation at Disneyworld, the next you are sucked into a twisted nightmare. 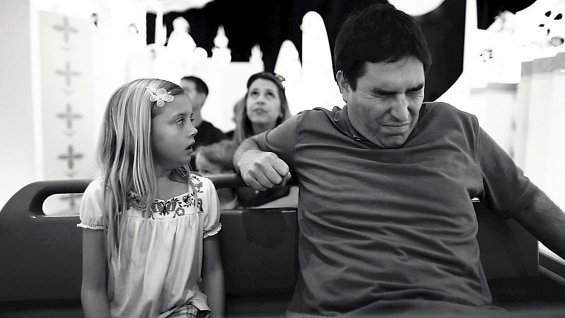 The torment begins when typical American husband and father, Jim (Roy Abramsohn), receives a call from his boss telling him he is fired. Keeping the news from his family, he embarks on the final day of their vacation at the happiest place on earth. Soon, Jim starts to have horrid visions, and bizarre encounters, all while fantasizing about two cute french girls he keeps running into. Eventually he loses his children and has to go searching for them in the darkest recesses of the park. Comedy adds a big layer to the film as well. The acting can be a bit silly and hard to watch, but once you realize it is intentional, it retains a certain humor.

Jim who loves his wife and children, also succumbs to temptation when beautiful girls surround him. Though you can hardly blame him when his wife is constantly nagging and showing little to no affection. 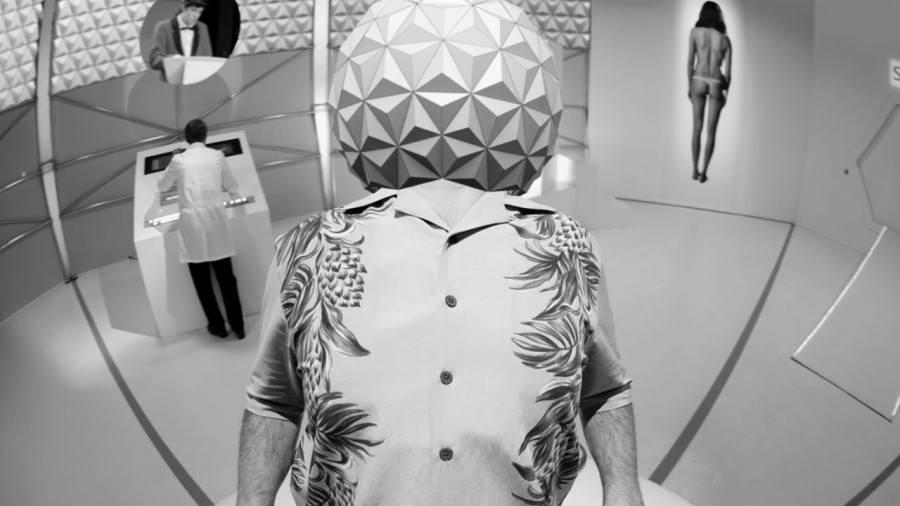 For a movie that was shot under the radar, it looks pretty good. But make no mistake, this is not getting any cinematography awards. A lot of the movie is too bright or too dark, but that is to be expected as no equipment could be set up due to risk of being caught. Also, the whole flick looks kind of campy in general, but again, shooting guerrilla style has its limitations. Unforgivably, however, the green screen scenes are very obvious. I even noticed part of an actor disappear because he walked into a shadow on the backdrop. It was a good decision to make the whole movie in black and white; that probably made it easier to work with in the editing room, and kept it from looking like a home movie. The cinematography is lackluster, but the story is a mixed bag.

The plot was easy to follow, yet hard to understand. Even so, you want to know what happens next. For all it is worth, this film is not boring. It is a fun ride that shows you a dark and twisted tale with a familiar “happier time” setting. 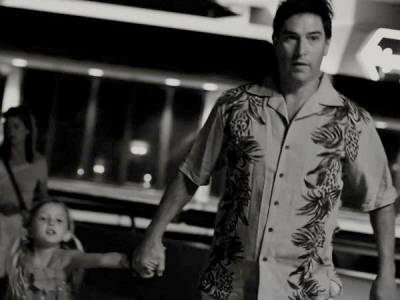 “Escape From Tomorrow” is a cult movie for sure. Given the story behind the production, it will go down in history. It is safe to say that you have not seen anything like it. If you are the kind of person that scoffs at low brow comedy and is easily disgusted then you probably should not run out to buy yourself a ticket. But if you enjoy a funny horror movie that takes chances and you can respect that this production does not follow the rules, then this is exactly the movie for you.