"Louder Than Words" Premieres At The Hamptons International Film Festival 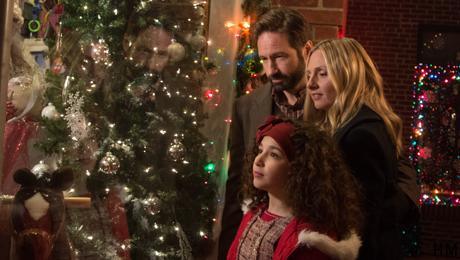 The film, starring David Duchovny,Hope Davis, Timothy Hutton and newcomer Olivia Steele Falconer, written by Benjamin Chapin, directed by Anthony Fabian (“Skin”), and produced by Anthony Mastromauro’s Identity Films, is based on the inspiring true story ofJohn and Brenda Fareri, who found solace after the death of their young daughter Maria, by channeling their grief into action and spearheading the creation of the world class Maria Fareri Children’s Hospital at Westchester Medical Center through their passion, dedication and fundraising efforts.

David Duchovny (“Californication,” “The X Files”) and Hope Davis (“The Newsroom,” “American Splendor,” “About Schmidt”) star asJohn and Brenda Fareri, with new-comer Olivia Steele Falconer playing the role of Maria Fareri and Timothy Hutton (“Leverage,” “The Ghost Writer”) playing Bruce Komiske, who helps the family in their long, emotional journey to obtain funding for the planning and building of the Maria Fareri Children’s Hospital in this touching film.

“Louder Than Words” portrays a family who instead of being gripped by loss created an extraordinary place of healing for thousands of ailing children and implemented a national standard for family health facilities. After Maria died, the Fareris learned that their daughter had made a special wish "for the health and well-being of all the children in the world," as part of a school project. With Maria’s spirit guiding them, her parents, family and 20,000 other members of the local Connecticut and Westchester, New York communities worked together to create a state of the art children's hospital, making Maria’s wish a reality.

Today, the Maria Fareri Children's Hospital is a place where families are welcomed into the healing process as partners with the staff in the care of their loved ones. This hospital, inspired by Maria’s wish for children’s global health and well-being, not only keeps Maria’s memory alive, but has also gone on to help thousands of children and their families, while becoming the template for future children’s hospitals.

“John and Brenda Fareri are truly extraordinary people,” commented producer Anthony Mastromauro of Identity Films. “When I first heard their story I immediately knew it was one that needed to be shared.”

Julie Fareri served as a producer alongside Mastromauro, while Rod Lurie served as executive producer.