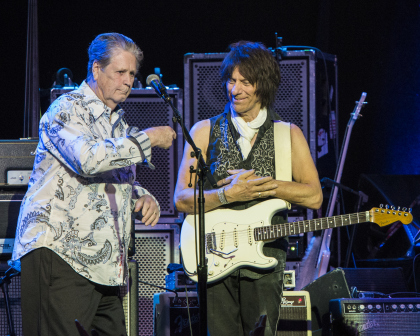 Ticket holders to the limited-seating event will be treated to sets from headliners Brian Wilson (co-founder The Beach Boys) and Jeff Beck (Yardbirds), joined by Al Jardine and David Marks for an evening of historic musical collaboration.  DJ A.T. will kick off the evening.

Jeff Beck ranks in the top 5 guitarists in Rolling Stone's "100 Greatest Guitarists of All Time." He has won seven Grammys, and was inducted into the Rock and Roll Hall of Fame twice: once as a member of the Yardbirds and as a solo artist.

Tickets for the School Rocks benefit concert are $300 and available at www.SanMiguelRocks.org or 773.890.0233.

Since 2007, School Rocks benefit concerts have raised $2.5 million for student scholarships. While 97% of San Miguel students live at or below the U.S. poverty rate, their high school graduation rate is 92%.

FYI
Batkid Restores Peace To The City Of San Francisco

Giving Back
Comedy For A Cause With Rainn Wilson

Music
Aerosmith: Rock For The Rising Sun - A Concert Film

Music
The Loss Of Lou Reed, A Rock Legend

Giving Back
Artists Rock Out To Banish Bullying

Film
The Weinstein Company's Benefit Concert Gets A Theatrical Release