The Airborne Toxic Event's Victorious Homecoming At The Mayan 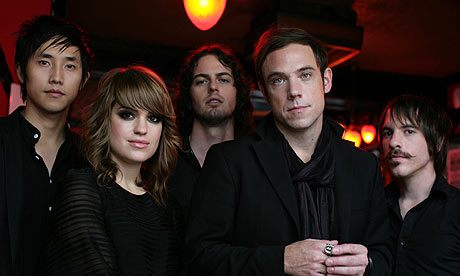 Seeing a favorite band live for the first time is just as dangerous as it is exciting. After spending countless hours listening to an album on repeat and memorizing every soul-penetrating lyric, transferring the songs from the CD player or iPod to the stage can be risky. If the band falls short of your high expectations it has the potential to ruin your sincere love for them. If they do a great job, however, your admiration and obsession is only enhanced. Last night I took the leap of faith and saw one of my favorite alternative rock bands, The Airborne Toxic Event, live at the MayanTheatre in Downtown L.A. Mercifully, I was rewarded with two full hours packed with powerful songs, one by one reaffirming my appreciation for this band.

Walking into the Mayan was like stepping into a different world for two reasons. The first was that every inch of this large dark cavernous venue was covered in etchings and symbols that harkened back to ancient civilizations, making you believe that Indiana Jones might just swing in on a vine at any moment. The second reason was that the crowd was made up of such a diverse group of people, all ages and backgrounds. In L.A. where neighborhoods and concerts are usually clear-cut in what kinds of people makeup their population of hipsters, business types, surfers etc., this was a true testament to the universal quality of Airborne’s songs.

Their music straddles the line between angsty rock and intellectual meditations on the human condition, creating a unique blend of fist pumping beats, thoughtful lyrics and emotionally stirring orchestral sounds. This truly distinctive merger of styles comes from the fact that each member of this five-piece band is talented in a variety of ways all playing multiple instruments. In fact, lead singer Mikel Jollett was initially a writer, essayist and newspaper contributor. As he passionately sang out the lines to “Wishing Well,” “Wedding Day,” and their haunting hit, “Sometime Around Midnight,” Jollett’s literary background was obvious.

Violist Anna Bulbrook’s evocative piercing chords added a depth and poignancy to each dramatic track, while the other members all came together shuffling between drums, keyboards and even a cello to create an all-encompassing musical experience. During their time on stage, Jollett seamlessly transitioned between jumping around, crowd surfing, and feverishly strumming his guitar for songs like “Gasoline” and “Changing,” and then slowing down for lonelier tunes like “Duet” and “Something New.”

This show was a perfect example of a band serving up some pure uncut rock and roll, to a devout crowd. They played a bevy of songs from their past albums (while the sea of fans in front of them sang along to every word) and sprinkled in some previews for their new album, “Such Hot Blood,” due out some time this spring. Shirking off the usual formula of saving your biggest hit for your encore, Jollett played theirs (“Midnight”) in the middle of their set, but was still urged back on stage for two encores by the ecstatic audience. But, the song I had been waiting for them to play was, “Missy.” Though it isn’t their most mainstream song, it takes place in Downtown Los Angeles, describing the emptiness that confronts people when their dreams don’t become reality. Making this their final song of the sold out night was truly genius on the part of this Angeleno group. As Jollett belted out the lines “I’m home,” dripping with sweat and emotion, everyone cheered and screamed, as if to reply, “Yes, you are.”

If you have a chance to see Airborne absolutely go, and don’t make any plans for afterwards. You never know how many encores they’ll end up doing.