Johnny Cash Is Getting His Own Stamp 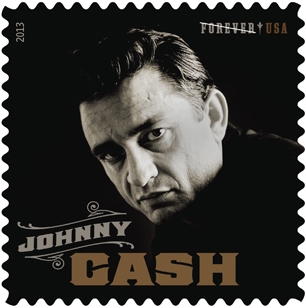 Three Hall of Fame inductions later, The U.S. Postal Service is finally memorializing country singer and American icon, JohnnyCash, in the form of his very own stamp. The deceased legend’s small portrait will be a part of the USPS’s new “Music Icons” series. The Cash stamp features a photograph by Frank Bez taken for 1963's “Ring of Fire: The Best of Johnny Cash.” The black-and-white design is intended to resemble a 45 rpm record sleeve.

"We get about 40,000 suggestions for stamp ideas each year but only about 20 topics make the cut," USPS representative Mark Saunders said of their choice.

A release date for the stamp has yet to be announced. Two more stamps in the "Music Icons" series will be revealed this year. Perhaps the secrecy is a tactic used to distract the public from the price increase?