The 2022 Stamp artwork has been unveiled. Among the series includes artwork of Katharine Graham. 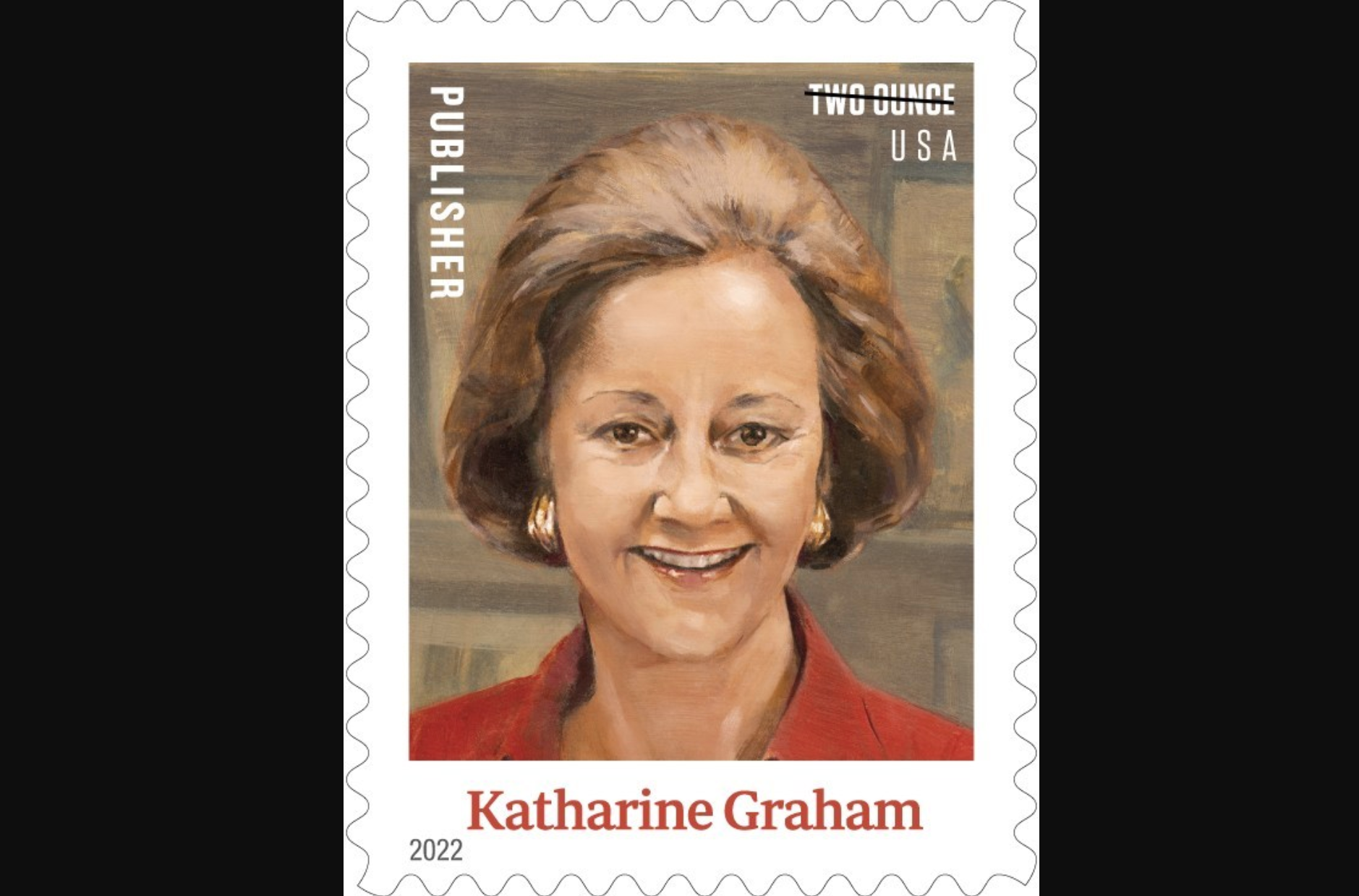 The 17th stamp in the Distinguished Americans series honors Katharine Graham (1917-–2001) was the first female head of a Fortune 500 company and a pivotal figure during turbulent moments in American history.

The stamp features an oil portrait of Graham, based on a photograph taken in the 1970s, during the peak of her influence as owner and president of The Washington Post Co., where she was also publisher of its flagship newspaper. Art director Derry Noyes designed the stamp with original art by Lynn Staley.

Lunar New Year — Year of the Tiger
The third of 12 stamps in the latest Lunar New Year stamp series celebrates the Year of the Tiger. Calling to mind the elaborately decorated masks used in the dragon or lion dances often performed in Lunar New Year parades, this three-dimensional mask depicting a tiger is a contemporary take on the long tradition of paper-cut folk art crafts created during this auspicious time of year. The tiger mask design incorporates colors and patterns symbolic to the holiday. Art director Antonio Alcalá designed the stamp and pane with original art by Camille Chew.

Blueberries
The new 4-cent Blueberries stamp will be available for sale in panes of 20 and coils of 3,000 and 10,000. The stamp features a pen, ink and watercolor illustration of a cluster of blueberries and leaves. Blueberries will join other similarly designed low-denomination stamps available separately for purchase: 1-cent Apples, 2-cent Meyer Lemons, 3-cent Strawberries, 5-cent Grapes and 10-cent Pears. Art director Derry Noyes designed the stamps using existing illustrations by John Burgoyne.

U.S. Flags
The Postal Service continues its tradition of celebrating the U.S. flag with this stamp, which will be available in panes of 20, booklets of 20, and coils of 100, 3,000 and 10,000. The stamp art is a painting of three flags in a circular formation, reminiscent of the 50 flags encircling the Washington Monument. The artist used three photographs of the same flag taken seconds apart as reference and stitched together the images into a single composition. Laura Stutzman was the stamp designer and illustrator. Ethel Kessler was the art director.

Love 2022
The two new Love stamps celebrate the joy that flowers bring. Inspired by old European folk art, the stamps feature digital illustrations with similar designs: three round, stylized blooms ranging symmetrically along the top, with smaller round blossoms in each of the lower corners. The background color of one stamp is powder blue, and the other is coral. Twisting vines, which hold small multi-petaled flowers, form abstract heart shapes. The letters of the word "LOVE" are interspersed among the decorative vines. Bailey Sullivan designed the stamps and created the original art. Greg Breeding was the art director.

Edmonia Lewis
The 45th stamp in the Black Heritage series honors sculptor Edmonia Lewis (circa 1844-1907). As the first African American and Native American sculptor to achieve international recognition, Lewis challenged social barriers and assumptions about artists in mid-19th century America. The stamp art is a casein-on-wood portrait of Lewis, based on a photograph taken in Boston between 1864 and 1871. Art director Antonio Alcalá designed the stamp with original art by Alex Bostic.

Butterfly Garden Flowers
The two nondenominated Butterfly Garden Flowers stamps are intended for bulk mailings by authorized nonprofit organizations. Each stamp features one of two flowers that butterflies love to visit: scabiosas or cosmos. Inspired by block-printed textile and pattern design, the artist hand-carved the images into linoleum blocks. After inking the blocks, she pressed them onto paper, scanned the images and added color digitally. Art director Antonio Alcalá designed the stamps with original art by Rigel Stuhmiller.

Mountain Flora
These four new stamps celebrate the beauty of mountain flowers. Each Mountain Flora stamp features a different flower: a purple pasqueflower, an orange-red wood lily, a bright yellow alpine buttercup and a dark pink Woods' rose. The artist's hand-drawn illustrations, refined digitally, create a block-print aesthetic. The stamps will be issued in booklets of 20 and coils of 3,000 and 10,000. Art director Ethel Kessler designed the stamps with original art by Lili Arnold.

Title IX
This stamp release commemorates the 50th anniversary of the passage of Title IX, the civil rights law prohibiting discrimination on the basis of sex in any educational program or activity receiving federal financial assistance. Applied at educational institutions over a wide range of programs, its most visible impact has been on school athletics. Four different stamps feature dark blue silhouettes of one of four female athletes: a runner, a swimmer, a gymnast and a soccer player. Yellow laurel branches, symbolic of victory, rest in their hair and on the swimmer's cap. Artist Melinda Beck designed the stamps. Derry Noyes was the art director.

Sunflower Bouquet
The Sunflower Bouquet 2-ounce stamp features an array of sunflowers, irises and other small flowers priced to accommodate the weight of heavy invitations, oversize greeting cards and other mailings that require extra postage. The Sunflower Bouquet stamp is similar in design to the new Tulips Forever stamp, and the two form a natural pair. The stamp was designed by art director Ethel Kessler, with digital photography by Harold Davis.

Tulips
The Tulips Forever stamp features a luminous, almost ethereal assortment of overlapping tulips in red, orange, yellow, purple and white against a bright white background. Similar in design to the 2-ounce Sunflower Bouquet stamp, this stamp can be used on RSVP envelopes often enclosed with wedding invitations. In addition to regular correspondence, it is also perfect for party invitations, thank-you notes and important announcements. This stamp was designed by art director Ethel Kessler, with digital photography by Harold Davis.

Pete Seeger
The 10th stamp in the Music Icons series honors Pete Seeger (1919-2014), a champion of traditional music and its power to inspire activism. Seeger's clear tenor voice, iconic banjo and enormous charisma transformed concerts into singalongs. The stamp art features a color-tinted black-and-white photograph of Seeger singing and playing his banjo in the early 1960s, by Dan Seeger, the performer's son. One side of the pane includes 16 stamps and the image of a sliver of a record seeming to peek out the top of the sleeve. A larger version of the stamp art photograph appears on the reverse side. Art director Antonio Alcalá designed the stamp and pane.

Women's Rowing
These stamps celebrate women's rowing, a graceful but demanding sport in which American women have excelled, including in the Olympics. The artwork, which covers the entire pane, is a stylized illustration of five eight-person rowing teams competing or practicing. Four stamp designs are featured in a pane of 20 stamps arranged as five staggered rows of four. Nancy Stahl designed and illustrated the stamps and pane. Ethel Kessler was the art director.

Eugenie Clark
Affectionately known as the "Shark Lady," pioneering marine biologist Eugenie Clark (1922-2015) spent her career working tirelessly to change public perception about sharks as well as to preserve marine environments around the world. The stamp art features a digital collage, including a photograph of Clark and a lemon shark. Wavy blue elements in the background evoke an undersea scene. Multidisciplinary artist Amanda Phingbodhipakkiya designed and created the stamp. Antonio Alcalá was the art director.

Pony Cars
Over the past six decades, pony cars have become a uniquely American obsession, bringing a youthful spirit to the automotive world. These stamps celebrate five iconic U.S. automobiles — the 1969 Ford Mustang Boss 302, the 1970 Dodge Challenger R/T, the 1969 Chevrolet Camaro Z/28, the 1967 Mercury Cougar XR-7 GT and the 1969 AMC Javelin SST. The bold and dramatic artwork, painted with oils on panel, captures the energy and mystique of pony cars. Zack Bryant designed the stamps with original art by Tom Fritz. Greg Breeding was the art director.

Elephants
This lighthearted and playful stamp celebrates America's affection for elephants. A graphic illustration of an elephant interacting with its young calf represents the loving nature of these beloved animals. Two stylized plants and a bright orange sun add whimsy and color. The Elephants stamp will be sold in booklets of 20. Art director Derry Noyes designed the stamp with original art by Rafael López.

George Morrison
One of the nation's greatest modernist artists and a founding figure of Native American modernism, George Morrison (1919-2000) challenged prevailing ideas of what Native American art should be, arguing that an artist's identity can exist independently from the nature of the art he creates. Morrison is best known for his abstract landscapes and monumental wood collages. A pane of 20 colorful stamps showcases five of Morrison's artworks. The selvage features a photograph of the artist in his home studio. Antonio Alcalá was the art director and designer for this stamp pane.

Mighty Mississippi
The Mississippi River is variously referred to as America's backbone, heart and soul. The Mighty Mississippi release honors the big river with a portfolio of 10 photographic stamps, each representing a state along its course. On the back of the pane is a map of the central United States, detailing the river and its major tributaries. Art director Ethel Kessler designed the pane using existing photographs.

Postal Products
Customers may purchase stamps and other philatelic products through the Postal Store at usps.com/shopstamps, by calling 844-737-7826, by mail through USA Philatelic, or at Post Office locations nationwide.

The Postal Service generally receives no tax dollars for operating expenses and relies on the sale of postage, products and services to fund its operations.