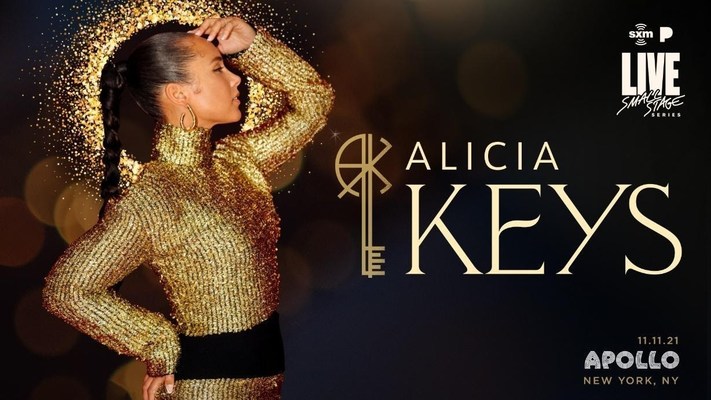 NEW YORK, Oct. 22, 2021 /PRNewswire/ -- SiriusXM announced today that 15-time GRAMMY® Award winning artist Alicia Keys will return to her hometown, New York City, to perform at the world-famous Apollo Theater in Harlem for a special, intimate, and exclusive invitation-only concert for SiriusXM subscribers and Pandora listeners on Thursday, November 11. The special performance in Keys' hometown is a part of SiriusXM and Pandora's Small Stage Series.

Alicia Keys' return to the Apollo will feature Keys in all her glory and musical greatness as she performs her fan favorite hits as well as music from her latest album Alicia and preview all new music from her forthcoming, highly anticipated eighth studio album, including the sultry and timeless new single, "LALA." This is the first in a limited series of one night only shows Keys will be doing.

"I love the Apollo," Keys said, "The vibe there is magical. There's so many songs I can't wait to play! Everyone has always told me my voice would be perfect to host a radio show, and with my limited SiriusXM Channel, we're gonna have a ball!"

The performance will air on SiriusXM's Heart & Soul channel on Tuesday, November 16 at 6:00 pm ET. The concert will also air in its entirety on Alicia Keys' exclusive SiriusXM channel Alicia Keys Radio via satellite (channel 48) and on the SXM App on Friday, December 10 at 8:00 pm ET and PT.

To maintain the highest public health standards and/or requirements, SiriusXM will adhere to health and safety protocols for the venue, and all state and local health mandates to protect attendees, staff, and artists.

The legendary Apollo Theater—the soul of American culture—plays a vital role in cultivating emerging artists and launching legends. Since its founding the Apollo has served as a center of innovation and a creative catalyst for Harlem, the city of New York, and the world. For more information, visit www.apollotheater.org.

SiriusXM and Pandora are offering a chance to win tickets and a trip to New York City to see Alicia Keys perform at the Apollo Theater on November 11, 2021.  SiriusXM subscribers as of 10/06/21 can enter here; Non-subscribers/listeners can enter here; and Pandora listeners can enter for a chance to win tickets only here. No Purchase Necessary. U.S. only, must be at least 18+ to enter. Odds of winning depend on the number of eligible entries received. Subject to Official Rules.  Void where prohibited.

SiriusXM is available to subscribers in their car and on their phone and connected devices at home with the SXM App. Streaming access is included for most subscribers. Go to www.siriusxm.com/ways-to-listen to learn more.

Alicia Keys is a 15-time GRAMMY® Award-winning singer, songwriter, musician, producer, accomplished actress, New York Times best-selling author, film/television and Broadway producer, entrepreneur, and a powerful force in the world of activism. Since the release of her monumental 2001 debut album, SONGS IN A MINOR, Keys has sold over 65 million records and built an unparalleled repertoire of hits and accomplishments. Alicia has become the #1 RIAA certified Female R&B artist of the millennium with 27.5 Million worldwide certified digital sales (US) and 20 Million Album Sales (US). Her seventh studio album ALICIA was released to rave reviews in September 2020 and earned Keys her 8th #1 album on the Billboard R&B Albums chart. The first single, "Show Me Love," earned Keys a record-extending 11th #1 on the Billboard Adult R&B Songs airplay chart and was certified gold. Her follow-up platinum hit single, "Underdog," went #1 on the overall iTunes chart and became the most added song at Top 40 radio in the US upon its release. Keys released her new book "More Myself: A Journey" in March 2020 via Flatiron Books, which debuted and spent multiple weeks on The New York Times Bestseller List. Alicia recently launched her lifestyle beauty brand, Keys Soulcare, which aims to go beyond skincare to truly care for the whole self; body, mind, and spirit.

FYI
The Last Podcast on the Left Signs With SIRIUSXM