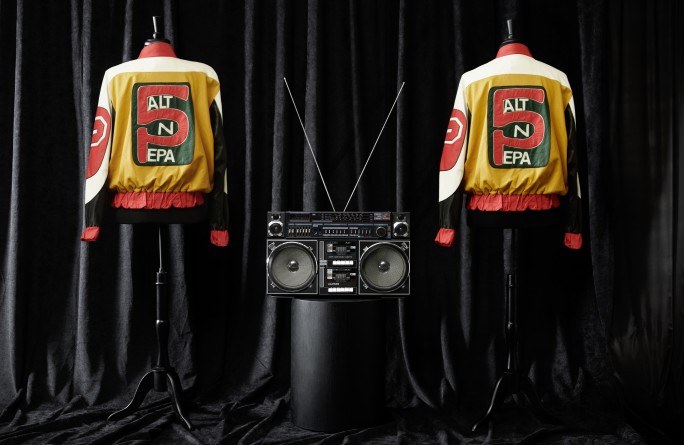 Other lots included a five-piece drum kit, once used by Questlove of The Roots, and one of rapper Slick Rick's diamond eyepatches, which sold for $30,240 and $25,200 respectively. A pair of "Push It" Jackets worn by hip hop duo Salt-N-Pepa in a 2015 Super Bowl commercial went for just under $24,000.

A celebration of the history and cultural impact of Hip Hop, the sale reflects on the impact the movement has had on art and culture from the late 1970s through the “Golden Age” of the mid-1980s to mid-1990s, and up to the present. Among the newly announced highlights in the sale include the iconic Salt-N-Pepa “Push It” jackets; visual artist, filmmaker and Hip Hop pioneer Fab 5 Freddy’s ‘MTV’ ring made specially for Yo! MTV Raps; a private lyric writing lesson and studio session with the God MC Rakim Allah; a unique art installation by DJ Ross One entitled The Wall of Boom, which is comprised of 32 vintage boomboxes, and much more.

A portion of Sotheby’s proceeds will benefit the Queens Public Library Foundation, to support their Hip Hop Programs, coordinated by “Uncle” Ralph McDaniels, as well as Building Beats, a non-profit community organization that teaches tech, entrepreneurial and leadership skills to underserved youth through DJ and music programs.

The auction was organized in collaboration with Monica Lynch, former president of Tommy Boy Records (1981-1998) who helped launch the careers of legends Afrika Bambaataa & Soulsonic Force, Queen Latifah, De La Soul, and Naughty by Nature, among many others.