Series Report Card: These 23 Shows Will Return To CBS 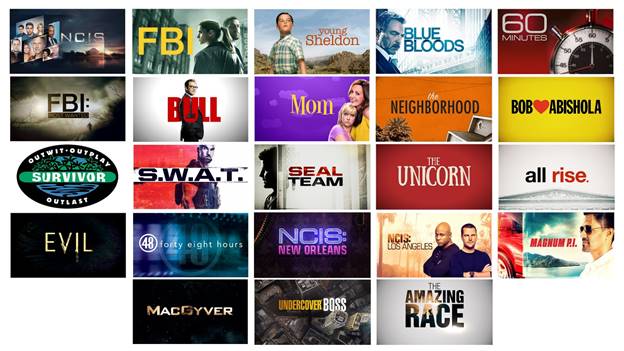 CBS today announced the return of 23 series, renewing 80% of its top-rated lineup for the 2020-2021 broadcast season. The Network will announce its new series and 2020-2021 primetime schedule in the coming weeks.

"Thanks to these exceptional shows, we're going to win the current season by 1 million viewers," said Kelly Kahl, President, CBS Entertainment. "Next year, we'll have these strong returning series as our foundation...and Super Bowl LV too. It's a well-balanced lineup across Entertainment, News and Sports that will put us in an incredibly stable position for 2020-2021."

Highlights for returning shows include:

·         CBS has renewed seven shows watched by over 10 million viewers per week, more than any other network: NCIS, FBI, BLUE BLOODS, YOUNG SHELDON, BULL, 60 MINUTES and FBI: MOST WANTED.

·         All shows from this season's Monday night lineup have been renewed. THE NEIGHBORHOOD and BOB ♥ ABISHOLA rank among the top comedies on television, with larger audiences than every comedy on all other networks. ALL RISE is the #3 new drama on any network, and BULL has been Monday's top entertainment series at 10:00 PM this season, averaging over 10.5 million viewers.

·         MACGYVER, MAGNUM P.I. and BLUE BLOODS return from a night the Network wins this season by +3.6 million viewers.

CBS is on track to finish the current season as America's Most Watched Network for the 12th consecutive year by a margin of 1 million viewers. The Network is also #1 in primetime, daytime and late night for the fourth straight year.