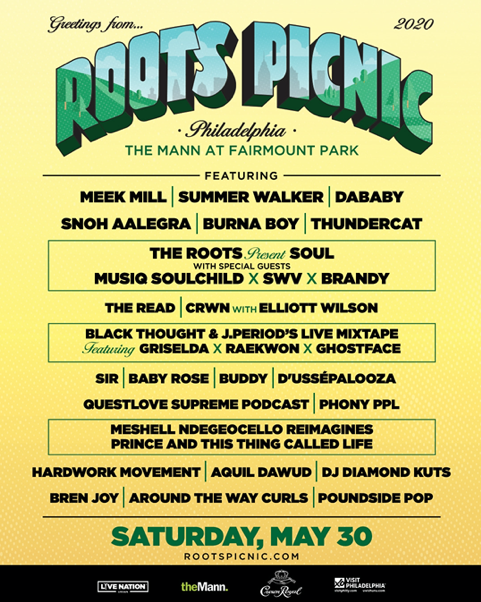 Live Nation Urban & The Roots team up to present the thirteenth annual “Roots Picnic” Saturday, May 30, 2020 in Philadelphia, PA. This year the Picnic will take place at the Mann at Fairmount Park, for the second consecutive year.

For ticketing information including VIP Packages, and more details, click HERE. The full confirmed lineup can be found below.

Citi is the official presale credit card of The Roots Picnic. As such, Citi cardmembers will have access to purchase presale tickets beginning Tuesday, February 11 at 12pm local time until Thursday, February 13 at 10pm local time through Citi Entertainment®. For complete presale details visit www.citientertinament.com

Celebrating its thirteenth-year anniversary, the festival grounds will include 3 stages of music, gaming, art and dialogue. “Roots Picnic” continues to align with music and culture and remains known for careful curation that unites music’s hottest acts, influencers, tastemakers, and thought leaders for one unforgettable day—and this year proudly continues that tradition.

This year the festival will feature performances from Philadelphia’s own Meek Mill, as well as Summer Walker, DaBaby, Snoh Aalegra, Burna Boy, Thundercat and many more. There will be heavy emphasis on collaboration and creativity as The Roots present a curated set celebrating R&B Music, titled The Roots Present SOUL, with special guests Brandy, SWV and Musiq Soulchild who’s celebrating the 20th anniversary of his seminal album Aijuswanaseing. Additionally, an annual highlight Black Thought and J Period’s “Live Mixtape” will feature breakout Buffalo based rappers Griselda, as well as Wu Tang Clan members Ghostface and Raekwon. Another curation will feature Meshell Ndegeocello: Reimagining Prince and This Thing Called Life. The live podcast experience returns and will include episodes of Around the Way Curls Podcast, The Read and Questlove Supreme as well as CRWN with Elliott Wilson.

“Always a highlight of the year, The Roots Picnic continues to grow and solidify itself as a cornerstone of Philadelphia culture”, says Shawn Gee, President of Live Nation Urban and Roots manager and co-founder of the event. “This year we are presenting a few special collaborative sets, one specifically with the Roots celebrating R&B music, with some legendary artists. Personally, I am excited that Meek Mill will grace the Roots Picnic stage this year, as this is the only major event in our hometown that he hasn’t played yet. We are also excited to be back at the Mann Center in Fairmount Park and looking forward to another great year”.

Since launching in 2007, The Roots Picnic has stood at the crossroads of music and culture, entertaining, engaging, and enlightening millions of fans along the way. Its dynamic lineups have included everyone from The Weeknd, Pharrell, Snoop Dogg, Phantogram, Usher, Nas, A$AP Rocky, Macklemore & Ryan Lewis, and Future to Vampire Weekend, The War On Drugs, Gary Clark, Jr., Solange, Diplo, Gnarls Barkley, and more. “Roots Picnic” isn’t just a cornerstone of the group’s career, but a cornerstone of the culture.

Around the Way Curls Podcast