In a year like no other, “The 54th Annual CMA Awards” brought the Country Music community together, live, for the first time in months to celebrate the very best in the genre. In a night filled with riveting performances, heartfelt speeches and emotional tributes, Country Music’s Biggest Night™ proved, once again, that even in the toughest of times, the heart of Country remains true. 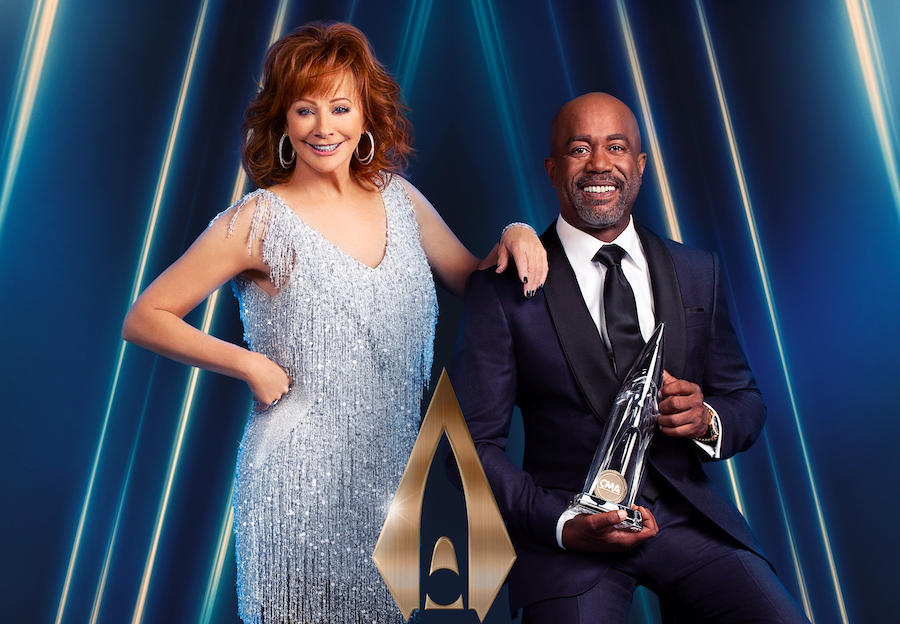 Eric Church, performing "Hell of a View," was awarded the night’s top honor of CMA Entertainer of the Year, a first for the artist. “...You know what the win is? The win is we all were here tonight together as Country Music, in-person, live, not on Zoom. I believe this. It’s going to be music that brings us out of this. That is the one thing that is going to save the entire world...”

With an audience full of the biggest names in Country Music, safety was the top priority throughout the event’s production. “It was a privilege to bring the Country Music community together tonight,” says Sarah Trahern, CMA Chief Executive Officer. “We have worked tirelessly over the past few months to develop a safe environment that would allow us to deliver a show our fans have come to expect. We have followed all protocols established by the CDC, local health authorities and creative unions to ensure the safety of our staff, our crew and our artists at every turn. Every single person was tested prior to entering our footprint, with many individuals being tested repeatedly out of an abundance of caution. Our process enabled us to catch any positive test results immediately and before any of those individuals ever stepped foot into the venue. I am grateful for the grace and the patience shown to us during this process and to those individuals that were unable to join us tonight, you were greatly missed and we wish you and your families the very best.”

Trahern added, “I am so proud to be a part of this community. It has been a very difficult year with many of us having suffered tremendous loss. My hope is that with the help of our incredible community of artists, we were able to shine a bit of light into the world through the magic of Country Music.”

Jason Aldean, Brothers Osborne, DierksBentley and AshleyMcBryde kicked off the night with a special collaboration honoring the late CharlieDaniels. Having felt the loss of many legends this year, the show also honored Country greats KennyRogers and Joe Diffie with tributes from LittleBigTown and Jon Pardi, respectively. Hosts RebaMcEntire and DariusRucker took the stage for a breathtaking collaboration of
Mac Davis’ “In the Ghetto,” a tribute to the Country legend and three-time CMA Awards host. You could also hear a pin drop when McBryde took the stage to perform “One Night Standards,” while Rucker brought the feel-good vibes with his chart-topping “Beers & Sunshine.”

Other highlights included Lambert delivering her latest hit single “Settling Down” while Combs also took the stage for a stellar performance of “Cold As You.” Ingrid Andress made her CMA Awards performance debut with a spectacular and tearful rendition of her top hit “More Hearts Than Mine.”

Thomas Rhett featuring host McEntire and ChrisTomlin filled the room with inspiration, while Chris Stapleton performed a stripped-back version of his latest single “Starting Over” with Morgane Stapleton. Pearce and Lady A’sCharlesKelley performed a soulful rendition of “I Hope You’re Happy Now.”

Following is a complete list of winners from “The 54th Annual CMA Awards” and previously announced winners of the 2020 CMA Broadcast Awards.

ENTERTAINER OF THE YEAR

SINGLE OF THE YEAR

ALBUM OF THE YEAR

Award goes to Artist and Producers

SONG OF THE YEAR

FEMALE VOCALIST OF THE YEAR

MALE VOCALIST OF THE YEAR

VOCAL GROUP OF THE YEAR

VOCAL DUO OF THE YEAR

MUSICAL EVENT OF THE YEAR

Award goes to Artists and Producer(s)

MUSICIAN OF THE YEAR

MUSIC VIDEO OF THE YEAR

Award goes to Artist(s) and Director

NEW ARTIST OF THE YEAR