For generations of Americans, the tradition of Thanksgiving Day and NFL football are historically intertwined. 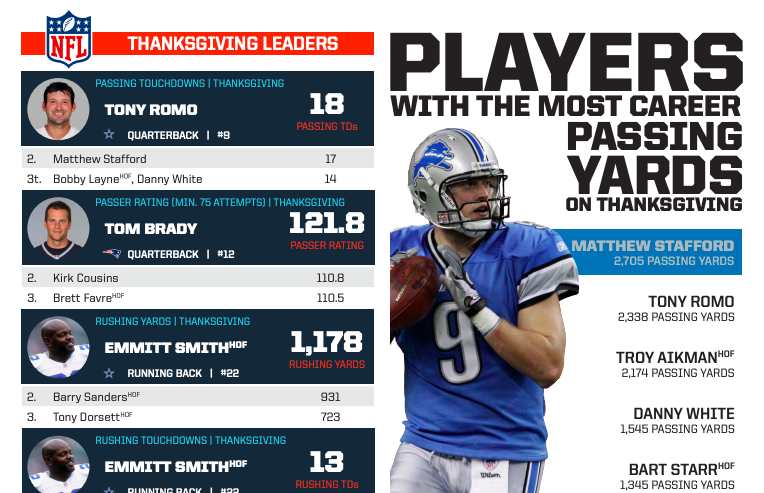 On Thanksgiving in 1925, a crowd of 36,000 – then the largest in professional football history – watched the CHICAGO BEARS play the CHICAGO CARDINALS to a scoreless tie at Wrigley Field. In 1934, the DETROIT LIONS and the defending world champion Bears squared off on Thanksgiving in the first NFL game nationally broadcast, with NBC radio on the call. This year, the three holiday games will be aired to millions across the country and around the world.

The 2020 installment of Thanksgiving Day football, presented by Verizon, will feature a tripleheader for the 15th consecutive season.

The Thanksgiving Day records of the teams playing this Thursday:

HOUSTON (3-7) at DETROIT (4-6): Thursday's matchup marks the second Thanksgiving Day meeting between the Texans and Lions. In Week 12 of the 2012 season – the Texans' only previous game on the holiday – wide receiver ANDRE JOHNSON registered nine receptions for 188 yards, the second-most receiving yards on Thanksgiving in NFL history, while defensive end J.J. WATT recorded three sacks in Houston's 34-31 overtime win over Detroit. It marked only the fifth game in league annals to go to overtime on Thanksgiving. Lions quarterback MATTHEW STAFFORD passed for 441 yards in the contest, tied for the third-most passing yards on the holiday in NFL history. This is the fifth regular-season meeting between the two clubs, with Houston holding a 3-1 advantage in the series.

Houston enters Week 12 coming off a 27-20 win over New England. Quarterback DESHAUN WATSON passed for 344 yards and two touchdowns with zero interceptions for a 121.9 rating and added a rushing touchdown in the victory. He is the fifth quarterback to record three games with at least 300 passing yards, two touchdown passes and a rushing touchdown in his first four seasons in NFL history, joining DAUNTE CULPEPPER (four games), JOSH ALLEN (three), JEFF GARCIA (three) and CHARLEY JOHNSON (three). Watson has at least two touchdown passes and a rating of 100-or-higher in seven of his past eight games. Wide receiver WILL FULLER has 376 receiving yards (125.3 per game) and a touchdown reception in his past three games on Thursday and aims for his fourth in a row on Thursday with at least five receptions and 100 receiving yards.

WASHINGTON (3-7) at DALLAS (3-7): Washington and Dallas meet for the 120th time in the regular season, with the Cowboys holding a 73-44-2 series advantage. Dallas has won eight of the nine meetings between the two franchises on Thanksgiving, including each of the past two. In their last meeting on the holiday, Week 12 of the 2018 season, wide receiver AMARI COOPER had eight receptions for 180 yards and two touchdowns in the Cowboys' 31-23 victory. Cooper's 90-yard touchdown reception from quarterback DAK PRESCOTT marks the second-longest completion on Thanksgiving in NFL history.

Washington enters the holiday after a 20-9 victory over Cincinnati in Week 11. Quarterback ALEX SMITH passed for 263 yards and two touchdowns with one interception for a 102.9 rating in his only career start at Dallas (November 5, 2017, with Kansas City) and has thrown at least two touchdown passes in three of his four career starts against the Cowboys. Rookie running back ANTONIO GIBSON rushed for 94 yards and a touchdown last week and has a rushing touchdown in four consecutive games, tied for the longest active streak in the NFL. Gibson, who leads all rookies with eight rushing touchdowns this season, can become the first rookie with a rushing touchdown in five consecutive games since NICK CHUBB (2018). Wide receiver TERRY MCLAURIN aims for his sixth in a row with at least five receptions and 70 receiving yards. He recorded a touchdown reception in Week 7 against Dallas and aims for his third in a row against the Cowboys with a touchdown. McLaurin ranks fourth in the NFL with 871 receiving yards this season. Rookie defensive end CHASE YOUNG registered his second career forced fumble last week and leads all rookies with 3.5 sacks this season.

Last week, Dallas defeated Minnesota, 31-28, as quarterback ANDY DALTON connected with tight end DALTON SCHULTZ for the game-winning touchdown pass with 1:37 remaining in the fourth quarter. In his past four starts on Thursday, Dalton has eight touchdown passes with zero interceptions for a 107.0 rating. Running back EZEKIEL ELLIOTT recorded 114 scrimmage yards (103 rushing, 11 receiving) with a touchdown catch last week, his first game with at least 100 rushing yards this season. In three career games on Thanksgiving, he has 400 scrimmage yards (133.3 per game) and three rushing touchdowns and aims for his fourth in a row on the holiday with at least 120 scrimmage yards. Rookie wide receiver CEEDEE LAMB registered his fourth touchdown reception of the season last week and leads all rookies with 48 catches this season.

BALTIMORE (6-4) at PITTSBURGH (10-0): The Ravens and Steelers meet for the second time on Thanksgiving to close out an all-day spread of holiday football. In their previous meeting on Thanksgiving (Week 13, 2013), Baltimore kicker JUSTIN TUCKER tied a Thanksgiving Day record by connecting on five field goals, as the Ravens defeated the Steelers, 22-20.

Thursday marks the second meeting of the season between the two AFC North rivals. In Week 8, Roethlisberger threw two second-half touchdowns and the Steelers defense forced four turnovers in Pittsburgh's 28-24 win at Baltimore.

Baltimore leads the NFL in rushing offense (160.5 yards per game) this season. Quarterback LAMAR JACKSON rushed for 51 yards last week, his 26th career game with at least 50 rushing yards. He passed for five touchdowns with zero interceptions for a 134.4 rating in his only career start on Thursday (December 12, 2019, vs. Cincinnati). Jackson aims for his third in a row on the road against the AFC North with at least three touchdown passes and a rating of 120-or-higher. Tight end MARK ANDREWS recorded his sixth touchdown reception of the season last week and leads all tight ends with 16 touchdown catches since 2019. Defensive end YANNICK NGAKOUE registered his first sack as a member of the Ravens last week. Cornerback MARCUS PETERS had a forced fumble and fumble recovery in Week 8 against Pittsburgh. Since entering the NFL in 2015, he leads the league in interceptions (30) and defensive touchdowns (seven).

Last week, Pittsburgh advanced to 10-0 for the first time in franchise history with a 27-3 win over Jacksonville and is the first team to win its first 10 games of the season since 2015 [CAROLINA (14-0) and NEW ENGLAND (10-0)]. In his last four home starts against Baltimore, Roethlisberger has 1,399 pass yards (349.8 per game) with 12 touchdowns and three interceptions for a 103.6 rating. In his last start on Thanksgiving (November 24, 2016, at Indianapolis), he passed for three touchdowns and had a 146.0 rating. Wide receiver CHASE CLAYPOOL leads all rookies with 10 touchdowns (eight receiving, two rushing) this season. He is the first wide receiver in the Super Bowl era and the fourth in league history with at least 10 touchdowns in his first 10 career games, joining BILLY HOWTON (11 touchdowns in 1952), BILL GROMAN (10 in 1960) and HARLON HILL (10 in 1954).

The Steelers allow the fewest points per game (17.4) this season and lead the NFL in sacks (38) and takeaways (21). Linebacker T.J. WATT ranks tied for third with nine sacks this season and his 43.5 sacks rank fourth in the league since he entered the NFL in 2017. Watt (14 tackles for loss) and linebacker VINCE WILLIAMS (14) are the only pair of teammates each with at least 10 tackles for loss this season. Safety MINKAH FITZPATRICK recorded his second career game with two interception last week. Since joining the Steelers in Week 3 of the 2019 season, his nine interceptions rank second in the NFL.

For the Thanksgiving all-time leaders and memorable moments, click here​.