Step Into 'Candy Land' on Food Network with Kristin Chenoweth 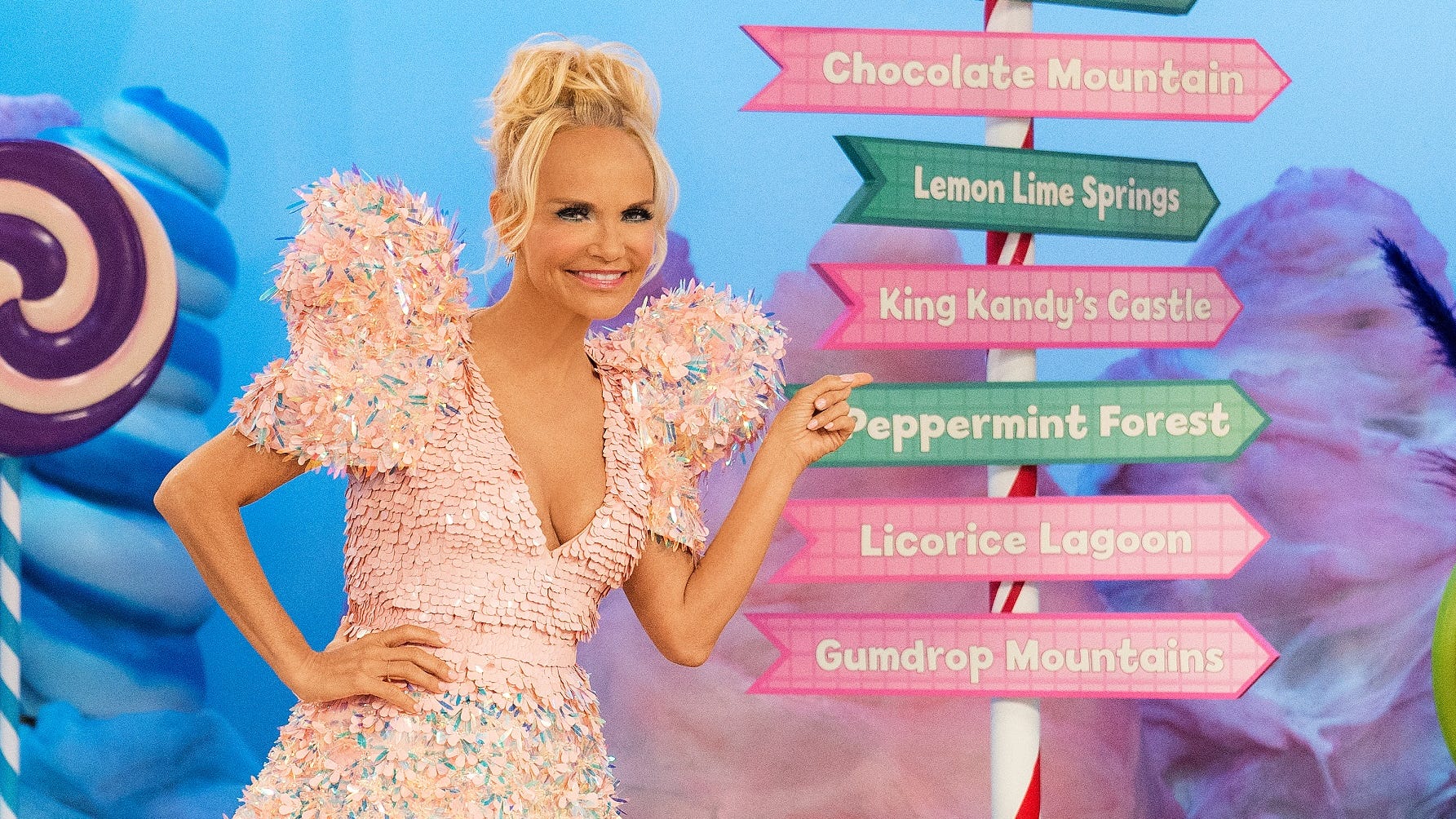 Food Network brings out the childhood imagination of five teams made up of professional cake and sugar artists on the new primetime competition series Candy Land, inspired by the classic Hasbro children's game. Through six episodes, Emmy and Tony Award-winning actress and singer Kristin Chenoweth hosts and guides the teams through the fantastical world of Candy Land, challenging them to create heavenly confectionary showpieces, all the while being thrown curveballs every step of the way by Lord Licorice that puts the teams' skills to the ultimate test. Premiering Sunday, November 15th at 9pm ET/PT, each episode features the teams stepping into one of the eye-popping lands come to life, including giant candy canes in the Peppermint Forest, life-size gumdrops at the Gumdrop Mountains, a real life gingerbread house at Chocolate Mountain, enormous and luscious lollipops in the Lollipop Woods, and lemons growing right off the vines in the Lemon Lime Springs.

The players must forage for flavors and unique ingredients within each land to use for their sugar masterpieces before presenting to judges Nacho Aguirre and Aarti Sequeira who determine which teams advance down the board game path based on creativity, technical execution, and how well the candies of the land were incorporated. The first team to make it to King Kandy's Castle wins the game and earns the grand prize of $25,000.

"For almost three-quarters of a century and with over 50 million games sold, Candy Land is one of the most beloved childhood memories for generations of families everywhere, and we are thrilled to be able to collaborate with Hasbro to bring viewers on this immersive journey with such an iconic property," said Courtney White, President, Food Network. "And with Kristin Chenoweth's charismatic presence, she is the perfect guide in capturing the imagination of audiences, making the world of Candy Land truly come alive."

Host Kristin Chenoweth welcomes the players to Candy Land before presenting the teams with their first challenge to create mystical and magical creatures the likes of which have never been seen before. Each team must present their work of art to judges Nacho Aguirre and Aarti Sequeira to see which team's time in Candy Land has come to an end. Other episodes feature the teams designing inventive and edible means of transportation for the citizens of Candy Land, creating beautiful upgrades for the town squares within each land, and a final challenge with the last teams standing thinking outside the box to deliver a one-of-a-kind gift that will need to impress King Kandy.

Whether it is over a 100 pounds of chocolate used for Chocolate Mountain or 1,000 lollipops needed to create the Lollipop Woods, go behind the scenes to see how the breathtaking set of Candy Land comes to life in the one-hour special premiering Sunday, November 15th at 10pm ET/PT. Host David Bromstad (HGTV's My Lottery Dream Home) treats viewers to an exclusive peek into the making of each land and the creative process of the minds that are undertaking this monumental challenge, along with learning the history of the iconic Hasbro game that continues to be a childhood favorite.

For more information on Candy Land, viewers can go to FoodNetwork.com/CandyLand to access insider videos with Kristin and the judges, as well as exclusive behind-the-scenes photos from the set. Plus, join in on the conversation throughout the season using #CandyLand.