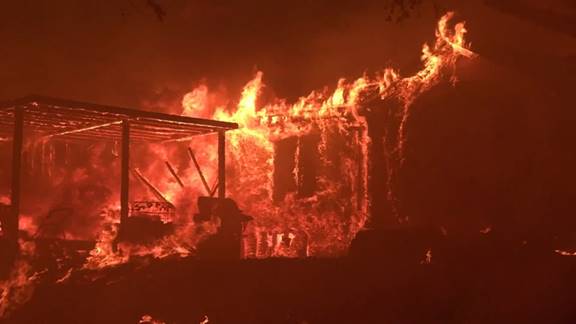 When California's state fire chief began his career more than 20 years ago, fires of 10 to 50,000 acres were a rare occurrence, but now they are a yearly event. California is still in the middle of its fire season and already nearly four million acres have burned and 30 people have been killed.

Scott Pelley reports from Northern California, where record temperatures and drought are driving an unprecedented and deadly fire season, on the next edition of 60 MINUTES, Sunday, Oct. 4 (7:30-8:30 PM, ET/7:00-8:00 PM, PT) on the CBS Television Network.

"These are fires that nobody, when I started in this business, ever even dreamed of happening in California. Not even close," says the state's fire chief, Thom Porter. "It dawned on me at one point that career fires are happening every single year. Right now, today, there are 10 fires in California that are 100,000 acres plus, and one that's 850,000 acres plus."

One reason for the hotter, larger fires is the dry brush accumulating on the forest floor. But the warming climate's effect on rising temperatures and aridity plays an even bigger role, says Porter. "I'm afraid, without significant change in the moisture that we get from the atmosphere, we're going to continue to see this getting worse and worse and worse."

Temperatures reached record highs in California this year, with Los Angeles hitting 120 degrees and a mark of 130 degrees posted in Death Valley that scientists are now trying to verify as the world record. It's an unthinkable trend with dire consequences, says Porter. "Every acre in California can and will burn someday," he tells Pelley.

"People ask, are we dealing with a new normal? And the sobering answer is, that's the best-case scenario," says Michael Mann, the geophysicist and director of the Earth System Science Center at Penn State University. "A new normal is the best-case scenario because that sort of means, well, we've got a new situation and we just have to learn how to deal with it. But it's much worse than that. So there are surprises in store, and we're seeing some of those surprises play out now," says Mann.

Fire season is a yearly occurrence, but it's been exacerbated by climate change, says Mann. "There are a number of independent... lines of evidence that tell us that this isn't natural, that this is human-caused," he says. "Let's look at the big picture, the warming of the planet, a little less than 2°F warming of the planet since pre-industrial time. It turns out that if you look at the factors that are driving natural changes right now – small but measurable fluctuations in the brightness of the sun, volcanic eruptions, they tell us that Earth should've cooled slightly over the past half-century," Mann tells Pelley.

NASA has recorded a steady decline in solar heat since the 1950s, but the Earth's temperature has only increased. Says Mann, "We can only explain that warming when we include the human factor of increased greenhouse gas concentrations, in particular, carbon dioxide from the burning of fossil fuels."