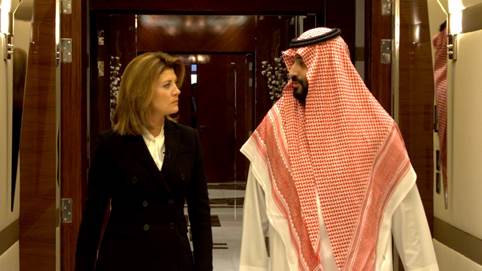 O'DONNELL: Did you order the murder of Jamal Khashoggi?

BIN SALMAN: Absolutely not. This was a heinous crime. But I take full responsibility as a leader in Saudi Arabia, especially since it was committed by individuals working for the Saudi government.

O'DONNELL: What does that mean that you take responsibility?

BIN SALMAN: When a crime is committed against a Saudi citizen by officials, working for the Saudi government, as a leader I must take responsibility. This was a mistake. And I must take all actions to avoid such a thing in the future.

ON OCT. 2, 2018 JAMAL KHASHOGGI ENTERED THE SAUDI CONSULATE IN ISTANBUL AND NEVER LEFT. TURKISH INVESTIGATORS ALLEGE A SAUDI HIT TEAM WAS WAITING FOR HIM. THEY REPORT HE WAS KILLED ALMOST IMMEDIATELY AND THAT HIS BODY WAS DISMEMBERED. TO THIS DAY HIS REMAINS HAVE NOT BEEN FOUND. SAUDI PUBLIC PROSECUTORS HAVE CHARGED 11 MEN, INCLUDING THE DEPUTY INTELLIGENCE CHIEF MAJOR GENERAL AHMED ASIRI. SAUD AL-QAHTANI, ONCE THE PRINCE'S POWERFUL RIGHT-HAND MAN, HAS BEEN IMPLICATED BUT NOT FORMALLY CHARGED.

O'DONNELL: The world wants the answer to this question. How did you not know about this operation?

O'DONNELL: Two of your closest advisors who are accused of orchestrating this plot were fired by the king, removed from your inner circle. The question is, how could you not know if this was carried out by people who are close to you?

BIN SALMAN: Today the investigations are being carried out. And once charges are proven against someone, regardless of their rank, it will be taken to court, no exception made.

O'DONNELL: I've read what the Saudi prosecutor has said about those that are charged in this murder. And it's gruesome, the details. When you heard that people close to you and in your government carried out such a grisly murder, and that the American government thinks that you ordered it, what did you think?

BIN SALMAN: I believe what you mentioned is not correct. There isn't an official statement announced by the American government in this regard. There isn't clear information or evidence that someone close to me did something to that effect. There are charges and they're being investigated. But again, you cannot imagine the pain that we suffered, especially as the Saudi government, from a crime such as this one.

O'DONNELL: The CIA has concluded with medium to high confidence that you personally targeted Khashoggi and you probably ordered his death.

O'DONNELL: What kind of threat is a newspaper columnist to the Kingdom of Saudi Arabia that he would deserve to be brutally murdered?

BIN SALMAN: There is no threat from any journalist. The threat to Saudi Arabia is from such actions against a Saudi journalist. This heinous crime, that took place in a Saudi consulate.

O'DONNELL: I spoke with a prominent U.S. senator before I came here. And he said because of what happened with Jamal Khashoggi and what's happened in Yemen that in his words there's not a lot of good will around here in Congress for Saudi Arabia. How much has it hurt the relationship?

BIN SALMAN: The relationship is much larger than that and this is a heinous incident and painful to all of us. Our role is to work day and night to overcome this and to make sure our future is much better than anything that happened in the past.