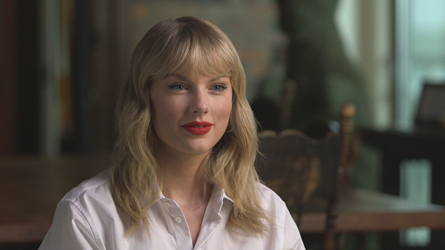 Music superstar Taylor Swift plans to go back into the studio to create new masters for her classic songs, to offset a blockbuster deal that put earlier versions in the hands of music mogul Scooter Braun, she tells Tracy Smith in an interview for CBS SUNDAY MORNING. The interview will be broadcast Sunday, August 25 (9:00 AM, ET) on the CBS Television Network.

Braun, a talent agent with whom Swift has had a contentious relationship, recently bought the right to Swift's masters – and more – when his company acquired Scott Borchetta's Big Machine Label Group in a deal reportedly worth $300 million.

In an in-depth interview that features Swift at home, in the studio and much more, the chart-topping singer-songwriter tells Smith she found out about the deal "when it was online" and that nobody in her inner circle knew of the pending deal. Big Machine officials see it differently.

Smith asks Swift about re-recording the past songs as a way to regain control of her master recordings.

Swift opens up to Smith about her songwriting process, growing up in the business, addressing her haters in music, her insecurities, her life today and much more. Smith is also behind the scenes for the creation of Swift's new music video and for the release of her new song.