Smokey Bear, the face of the longest-running PSA campaign in United States history, turns 75 today, continuing his legacy of bringing awareness to unwanted, human-caused fires in America. Smokey Bear's wildfire prevention campaign has had a dramatic impact since its introduction in 1944.

This progress continues today, with an approximate 14 percent reduction in the average number of human-caused wildfires from 2011-2018, compared to the previous 10 years. While it's clear his work has been successful, 9 out of 10 wildfires are still caused by humans, which means Smokey's iconic message is as important as ever.

To celebrate the wildfire prevention icon's milestone birthday, the USDA Forest Service, the National Association of State Foresters, and the Ad Council are releasing new PSAs featuring Betty White, announcing the addition of a new Smokey Bear balloon in the 2019 Macy's Thanksgiving Day Parade, and promoting birthday parties and local events across the nation. Together, these three partners make up the Cooperative Forest Fire Prevention (CFFP) Committee, the coalition behind Smokey Bear and his wildfire prevention campaign.

Smokey Bear has only said a handful of words over the last 75 years. To complement this signature message "Only You Can Prevent Wildfires" (voiced by actor Sam Elliott for the last 12 years), Smokey's famous friends are stepping in to speak through him about the importance of fire safety and wildfire prevention.

With the help of ad agency FCB and cutting-edge facial recognition and mapping technology, Smokey's friend Betty White is the most recent celebrity to lend her voice and carry on the beloved bear's legacy into his 75th year with an animated emoji PSA. Stephen Colbert, Jeff Foxworthy, and Al Roker have also lent their voices to the cause in similar PSAs launched earlier this year.

The celebration of Smokey's legacy will continue this fall with the debut of his new character balloon in the 93rd annual Macy's Thanksgiving Day Parade®. On Thursday, November 28, more than 3.5 million spectators and more than 50 million viewers nationwide will witness America's national champion of wildfire prevention fly through the streets of New York City in Smokey's return to the world-famous Macy's Parade line-up. A fan-favorite, Smokey Bear first debuted as a giant character balloon in the 1966 Macy's Parade and participated in the holiday spectacle every year until 1981. In celebration of his 50th birthday in 1993, Smokey made his last appearance before this year's return to form. Catch Smokey in action during the 93rd annual Macy's Thanksgiving Day Parade airing nationwide on NBC, Thursday, November 28 from 9:00 AM – 12:00 PM, in all time zones.

Smokey Bear's 75th birthday will also be celebrated by a variety of media partners, including Clear Channel Outdoor, Facebook, iHeartRadio, National CineMedia (NCM), Reddit and many others. Omnicom media agency Hearts & Science will be the Ad Council's pro bono partner for the birthday year, providing an overall digital strategy and negotiating close to 10,000,000 impressions in free display media, including specialty units that are triggered by high fire-risk weather.

The story of Smokey Bear begins with World War II. On December 7, 1941, the Japanese attacked Pearl Harbor, and the following spring, fired shells from submarines that exploded on an oil field near the Los Padres National Forest in California. Fear grew that more attacks could bring a disastrous loss of life and destruction of property, and even ignite raging wildfires.

With many experienced firefighters deployed in the war, it was up to communities to prevent wildfires as best they could. Quickly, the protection of forests became a matter of national importance. To rally Americans to the cause, the Forest Service organized the CFFP Committee with the help of the War Advertising Council (now known as The Ad Council), and the National Association of State Foresters. Together, they created posters and slogans, including "Forest Fires Aid the Enemy" and "Our Carelessness, Their Secret Weapon." 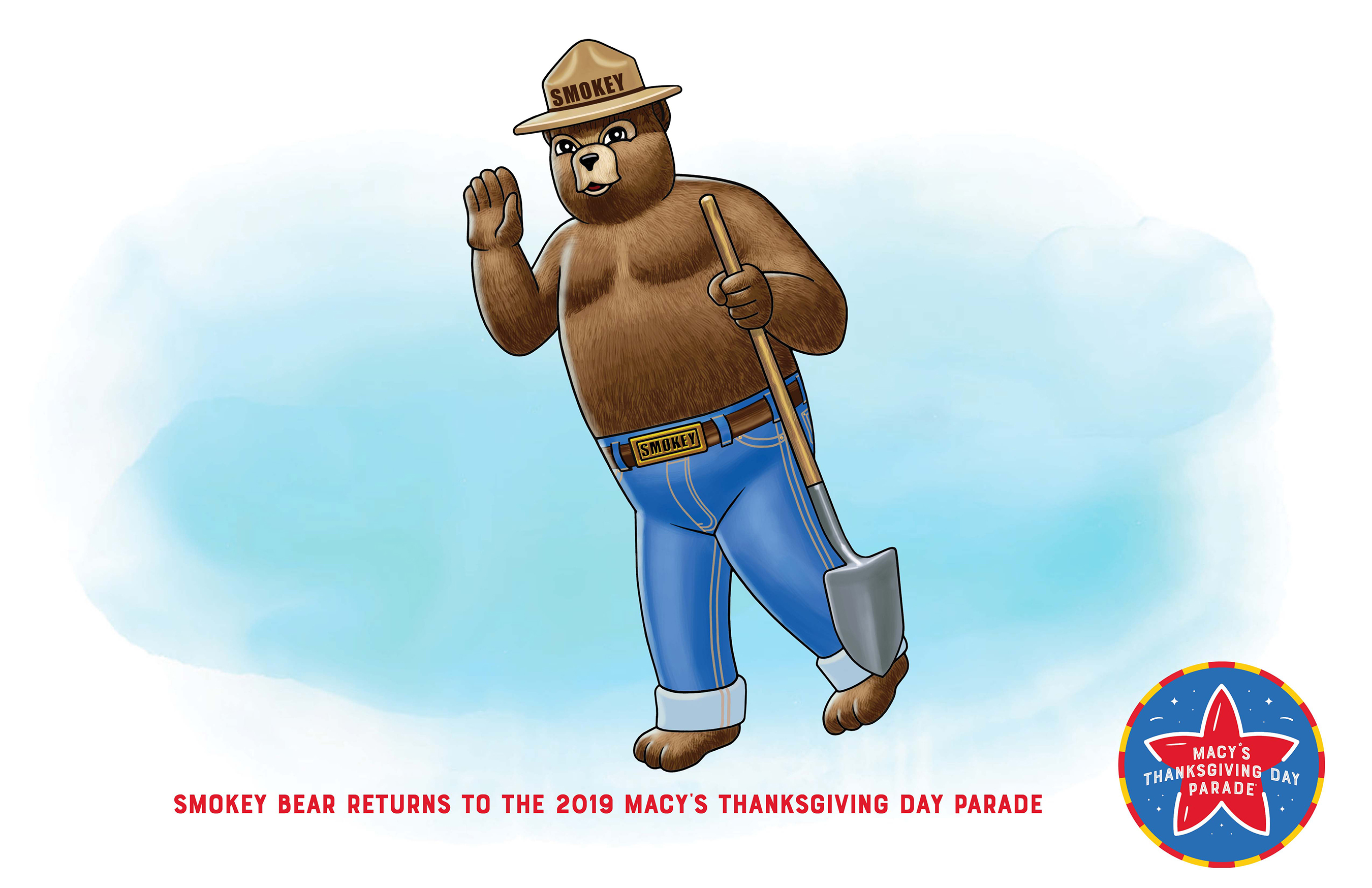 Smokey Bear first appeared on a forest fire prevention campaign poster in 1944 thanks to FCB, the creative agency that to this day is an essential partner of the campaign. Two years later, he and his message were featured on a series of stamps used nationwide, and by the 1950s, Smokey Bear had made his debut in radio commercials voiced by Washington radio personality Jackson Weaver. In the decades since, the beloved icon has been featured in countless TV and radio spots, posters, stamps, billboards, and memorabilia alongside well-known actors and celebrities including B.B. King, Barbara Stanwyck, Betty White, Dolly Parton, Leonard Nimoy, Ray Charles, and Ted Nugent.

Since 1944, wildfire prevention PSAs have run exclusively in time and space donated by the media. In the last seven and a half decades, that equates to more than $1.63 billion in donated media support. Today, Smokey's catchphrase is recognized by 96 percent of U.S. adults and 75 percent of young adult outdoor recreationists who are familiar with him see Smokey Bear as a role model for children.

L. A. Glam
Gap's 'It's Our Denim Now' Campaign Aims To Speak To Millenials