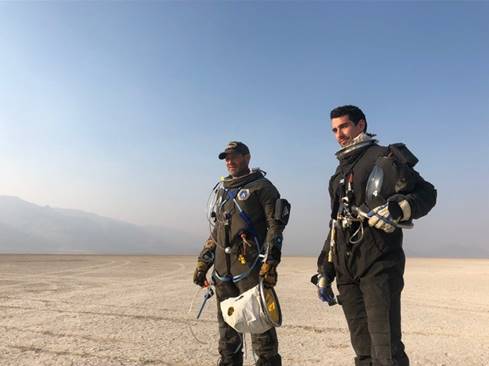 Silicon Valley billionaires need not apply. A group of colorful DIY rocketeers are taking their own path to space. A new Science Channel series, HOMEMADE ASTRONAUTS (WT), now in production, will follow three self-financed teams with sky-high dreams, in their cosmic quest to explore the final frontier on shoe-string budgets. The series will premiere in 2020.

Mike Hughes and Waldo Stakes are working on a manned rocket to space, designing a “Rock-oon” - part rocket, part balloon - that they hope to use to get Mike to the Karman line, the border between Earth’s atmosphere and outer space at about 62 miles high. To raise money and awareness for that pricey venture, they plan to first launch Mike 5,000 feet high in a steam-powered rocket.

Cameron Smith is creating a spacesuit that can withstand all the elements of space travel. To test his suit out and get it to the Armstrong line, which begins at an altitude of 60,000 feet, Cameron will hitch a ride on a specialized hot air balloon.

“As we celebrate the 50th anniversary of the moon landing, Homemade Astronauts looks at a group of ambitious individuals who are carrying on in the American tradition of finding their own way and making their dreams come true with old-fashioned grit and self-determination,” said Marc Etkind, General Manager, Science Channel.