Suicide is a difficult subject to tackle on stage, but comedian and character performer Jeannette Rizzi faces it head-on in her acclaimed solo production, Blindsided. (Hudson Guild Theater, as part of the 2019 Hollywood Fringe.) 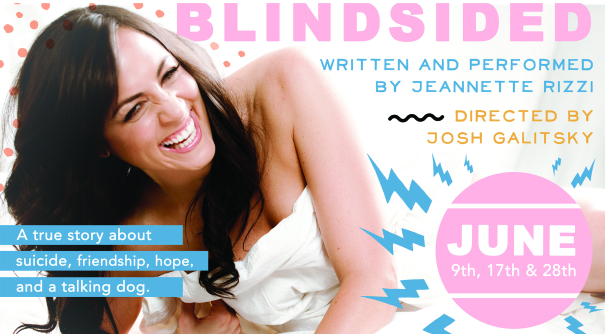 As raw as it is funny, Blindsided is a personal journey about how Rizzi — at the age of 17 — sees her life dive into a tailspin after the suicide of her best friend Katie. Despite being the daughter of a former monk and former nun (yes, really), Rizzi nonetheless struggles to find her spiritual and emotional compass, while facing off against her debilitating anxiety and depression.

Proceeds from her Hollywood Fringe performances will be donated to Teen Line, a Los Angeles-based hotline where teens can reach out to trained teen volunteers for guidance and support.

To date, Rizzi has helped raise over $10,000 for various mental health services and initiatives. High-resolution photos Even with its weighty subject matter, Blindsided sees Rizzi consistently finding the hilarious side of her situation, not to mention the surreal. (Yes, her story features an actual talking dog.)

"I wanted people to be open to hearing about a serious issue without leaving the show feeling sad or depressed," Rizzi explains.

"The only way I knew to approach it was to make it a comedy show, and take the risk of being serious for a few minutes to get the message across."

Blindsided is a product of Jeannette's commitment to live, as well as her pledge to helping others who battle with their own raison d'etre.

"It's ultimately a show about love, friendship, and finding hope during seemingly hopeless times," Rizzi says. The production showcases both her deft character work and her unique ability to connect with audiences.

"It took a long time for me to get comfortable during the scenes when no one was laughing," Rizzi adds, "but when someone comes up after the show and thanks me or relates to the not so funny parts, it's always worth it."

Lifestyle
What Are The Top Recommended Health Products?