The Golden State Warriors Stars Open Up On "60 Minutes" 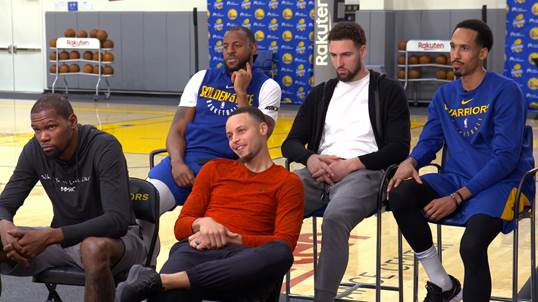 The Golden State Warriors will go down in history as one of the NBA’s great dynasties. The playoffs begin this weekend with the team vying for its fifth straight appearance in the finals – a feat no team has achieved in more than 50 years – and seeking its third straight title. How do they do it? As Jon Wertheim reports, the Warriors sport an army of future Hall of Fame players, an embarrassment of riches. Wertheim’s report will be broadcast on 60 MINUTES, Sunday, April 14 (7:00-8:00 PM, ET/PT) on CBS.

Warriors coach Steve Kerr is running a team that practically runs itself. He says he takes a hands-off approach. And it’s no wonder. He’s lucky enough to coach players on the order of Steph Curry, Kevin Durant, Klay Thompson and Draymond Green.

Kerr played on the Chicago Bulls teams of the 1990s alongside Michael Jordan, who is considered to be the best ever. “I sat and watched Michael Jordan every night in Chicago,” he tells Wertheim. “Something special was happening.”

Curry has been with the Warriors his entire career. This is his 10th season, yet they weren’t always a champion-caliber team. “I feel like I’ve played for three different teams,” says Curry, whose first several seasons the Warriors put up losing records. “The team that sucked, to the team trying to figure it out, to the established team that we’ve got, where we’re very confident in who we are, what we all bring to the table. I like this one,” says Curry.

But Curry resists characterizing Golden State as the defending champions. “I think that’s a bad perspective,” says the two-time NBA MVP. “You got to be like – attack. You got to go after – you can’t just sit like, I’m protecting something.” As Durant says about the championship trophy, “We’re just going to go get it.”

Wertheim’s report comes as the team reckons with the possible departure of Kevin Durant and is about to move from Oakland to downtown San Francisco. 60 MINUTES got a guided tour of the sparkling new $1.3 billion venue. Winning the championship once more for the Oakland fans would be a fitting goodbye, says Kerr. “This city has been really special to us and to the Warriors for the past four decades or so,” he tells Wertheim. “[Winning it] is the goal.”