Subway Adds A Zesty Kick To Their Menu

Subway has some new goods on the menu! 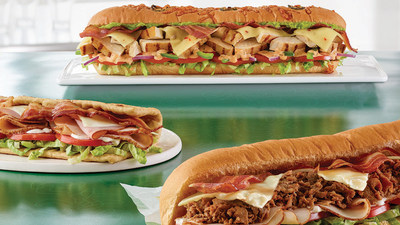 Introducing their NEW! Club Collection, which turns the rules upside down by modernizing their iconic sandwiches with a kick of spicy jalapeños, delicious steak and creamy guacamole.

hese crave-worthy, chef-inspired recipes for the Club sandwiches are:

Along with these new rule-breaking sandwiches, Subway's new Club Collection is accompanied by a creative campaign, "Breaking Club Traditions," created by Subway's agency of record Dentsu Aegis Network. The campaign brings Subway's twist on the club to life through scenarios that shake up traditions in other kinds of clubs, such as country clubs, chess clubs and motorcycle clubs and begin airing on April 25.

Subway continues to deliver unexpected flavors to its guests that they cannot find anywhere else, like the Ultimate Cheesy Garlic Bread sandwich and the Green Goddess Tuna Melt. The Club Collection not only brings the heat with a Jalapeño Cheddar bread that is baked fresh with whole jalapeños and Monterey cheese, but it also delivers a trifecta of savory steak, turkey and bacon.

Guests can try all three sandwiches for a limited time only now until June 26 at participating restaurants in the U.S. For more information and to join the conversation, visit Subway on Facebook, Instagram, Twitter and SubCulture®.

Food & Drinks
Effervescence Is An Immersive Experience For The Champagne Connoisseur