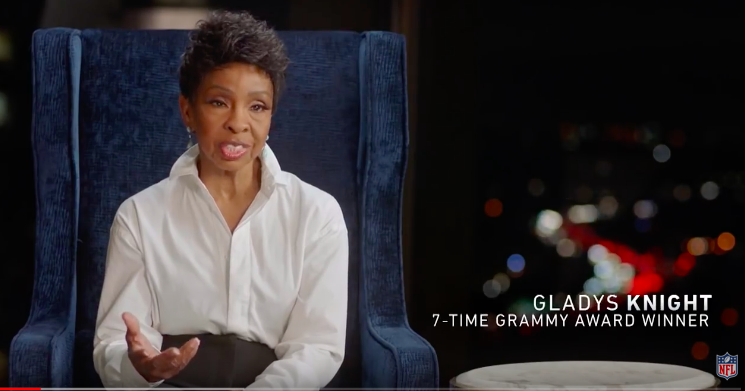 ​Seven-time Grammy Award-winner and "Empress of Soul" GLADYS KNIGHT will sing the National Anthem as part of Super Bowl LIII pregame festivities at Mercedes-Benz Stadium in Atlanta on Sunday, February 3, the NFL and CBS announced today. The performance will be televised live on CBS prior to kickoff.

"I am proud to use my voice to unite and represent our country in my hometown of Atlanta," said GLADYS KNIGHT. "The NFL recently announced their new social justice platform Inspire Change, and I am honored to be a part of its inaugural year."

Click HERE to watch an interview with Gladys Knight about her upcoming performance at Super Bowl LIII.

Gladys Knight has enjoyed #1 hits in Pop, Gospel, R&B and Adult Contemporary, and has triumphed in film, television and live performance. Knight has recorded two number-one Billboard Hot 100 singles ("Midnight Train to Georgia" and "That's What Friends Are For"), eleven number-one R&B singles, and six number-one R&B albums. She has won seven Grammy Awards and is an inductee into the Rock and Roll Hall of Fame along with The Pips. Fall of 2015 marked the release of Knight's first mainstream dance record, "Just A Little" in nearly twenty years. The song serves as lead single from her twelfth studio album that she is currently on. The year of 2011 was a year of much recognition as Knight was both honoring and being honored, first at a Michael Jackson tribute concert, and then at the 2011 Soul Train Awards.

Television
President Trump Sits Down With CBS' FACE THE NATION