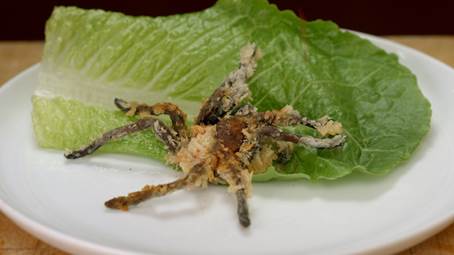 America’s culinary boundaries are about to be shattered as Smithsonian Networks introduces BUG BITES, a six-part, short-form series exploring the worldwide art of cooking and consuming insects. Nutritious, protein-packed and easy to sustainably farm, bugs are regularly eaten by 30 percent of the world’s population, and while most of North America has yet to fully embrace this culinary delight, U.S. foodies are beginning to take note. BUG BITES takes viewers into four notable chefs’ kitchens to explore traditional methods of preparing high-end insect delights, from grasshoppers to scorpions, as well as cutting-edge recipes curated for the modern palate. All six episodes of BUG BITES begin streaming exclusively in the U.S. on Monday, August 27 on Smithsonian Earth, available on Apple®, Roku®, Amazon, Android™ and at SmithsonianEarthTV.com. Viewers will also be able to stream all episodes at SmithsonianChannel.com/BugBites.

In BUG BITES, host Haley Chamberlain Nelson, biologist and self-proclaimed foodie, begins each episode diving into the natural history surrounding some of the food world’s favorite insect critters. Her next stop is to whip up a dish starring that particular bug with one of the series’ expert chefs, which include celebrated culinary artists such as:

David George Gordon – Gordon is a Seattle-based, award-winning author of 20 cookbooks who is well-known in the insect cooking field. He creates a waxworm stir fry with Nelson, as well as his favorite dish, tarantula tempura.

Megan Miller - San Francisco-based Miller is the co-founder of Bitty Foods and a former editor and writer for Outside Magazine. Her tropical spin on macadamia nut cookies includes her company’s signature cricket flour.

BUG BITES is produced by Smithsonian Earth in co-production with Blue Ant Media.