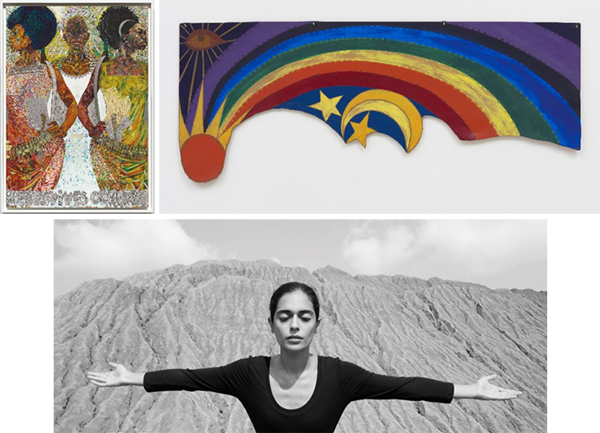 The Broad announced its exhibition schedule for 2019, led by the exclusive West Coast presentation of the internationally acclaimed exhibition, Soul of a Nation: Art in the Age of Black Power 1963-1983, followed by Shirin Neshat: I Will Greet the Sun Again. Originated by The Broad, Shirin Neshat: I Will Greet the Sun Againlaunches the first major survey of the renowned multidisciplinary artist to take place on the West Coast.

Soul of a Nation and Shirin Neshat: I Will Greet the Sun Again will be announced closer to the exhibition opening dates. For news and updates, sign up for email newsletters at www.thebroad.org/press or follow The Broad on Twitter, Facebook or Instagram.

Soul of a Nation celebrates the work of Black artists made over two decades beginning in 1963, at the height of the civil rights movement. The exhibition devotes individual galleries either to groups of artists working in a particular city — with three galleries dedicated to artists living and working in Los Angeles — or to a different kind of art production. The exhibition showcases communities engaged in robust artistic dialogues, while also revealing disagreements about what it meant to be a Black artist at this time. Artworks in the exhibition are both figurative and abstract, and range from collage, assemblage andphotography to painting, sculpture and performance. Ultimately, the exhibition emphasizes the dynamic contributions of Black artists to this significant period in American history and art.

Developed by Tate Modern in London (July 12-Oct. 22, 2017), Soul of a Nation debuted in the United States at Crystal Bridges in Bentonville, Arkansas (Feb. 3-April 23, 2018), and will travel to the Brooklyn Museum in New York (Sept. 14, 2018-Feb. 3, 2019) before making its final (and only West Coast) stop at The Broad in Los Angeles. It is accompanied by a full-color catalog surveying this crucial period in American art history, featuring thought-provoking essays that explore abstract and figurative art, and examine the most significant groups, exhibitions, publications, campaigns and institutions of the time.

Shirin Neshat: I Will Greet the Sun Again
Mid-October 2019 through early 2020

Originated by The Broad, the exhibition surveys 25 years of Neshat’s dynamic video works and photography, investigating the artist’s passionate engagement with ancient and recent Iranian history, the experience of living in exile, and the human impact of political revolution. Taking its name from a poem by poet Forugh Farrokhzad, it is accompanied by a full-color catalog that includes essays by exhibition curator Ed Schad and leading scholars and artists working in Iranian culture, photography and film.

Neshat left Iran when she was 17 years old to complete her studies at the University of California at Berkeley, after residing initially in Los Angeles. Due to the turbulence of the Islamic Revolution (1978-79) and the Iran-Iraq war (1980-88), Neshat continued to live outside of her home country. She first gained renown for her iconic 1990s photographic work Women of Allah, as well as immersive videos such as Rapture (1991) and Possessed (2001) (both now in the Broad collection). Neshat completed her first feature film, Women without Men, in 2009, and recently debuted a new feature film, Looking for Oum Kulthum, in 2018.

The exhibition connects Neshat’s early work — centered on the experiences of Muslim women as a mirror for Iran and Iranians living in exile — to acclaimed recent projects never-before-seen in American museums. Dreamers, the artist’s first examination of American society, will feature prominently. Influenced by the Surrealist films of Man Ray and Maya Deren, these photographs and videos examine the lives of outsiders and exiles from other countries who navigate their personal identities in the United States through a divided sense of culture and shifting sense of home.