Since The Volcanos, Where Can You Go In Hawaii?

You've seen the wild, crazy and scary headlines. "The Hawaiian Islands are COVERED in molten lava! The island of Hawaii has basically turned into the Real Earth version of Middle Earth's MORDOR! THOUSANDS are fleeing their homes! MASSES of lava have continually POURED ACROSS the island!" 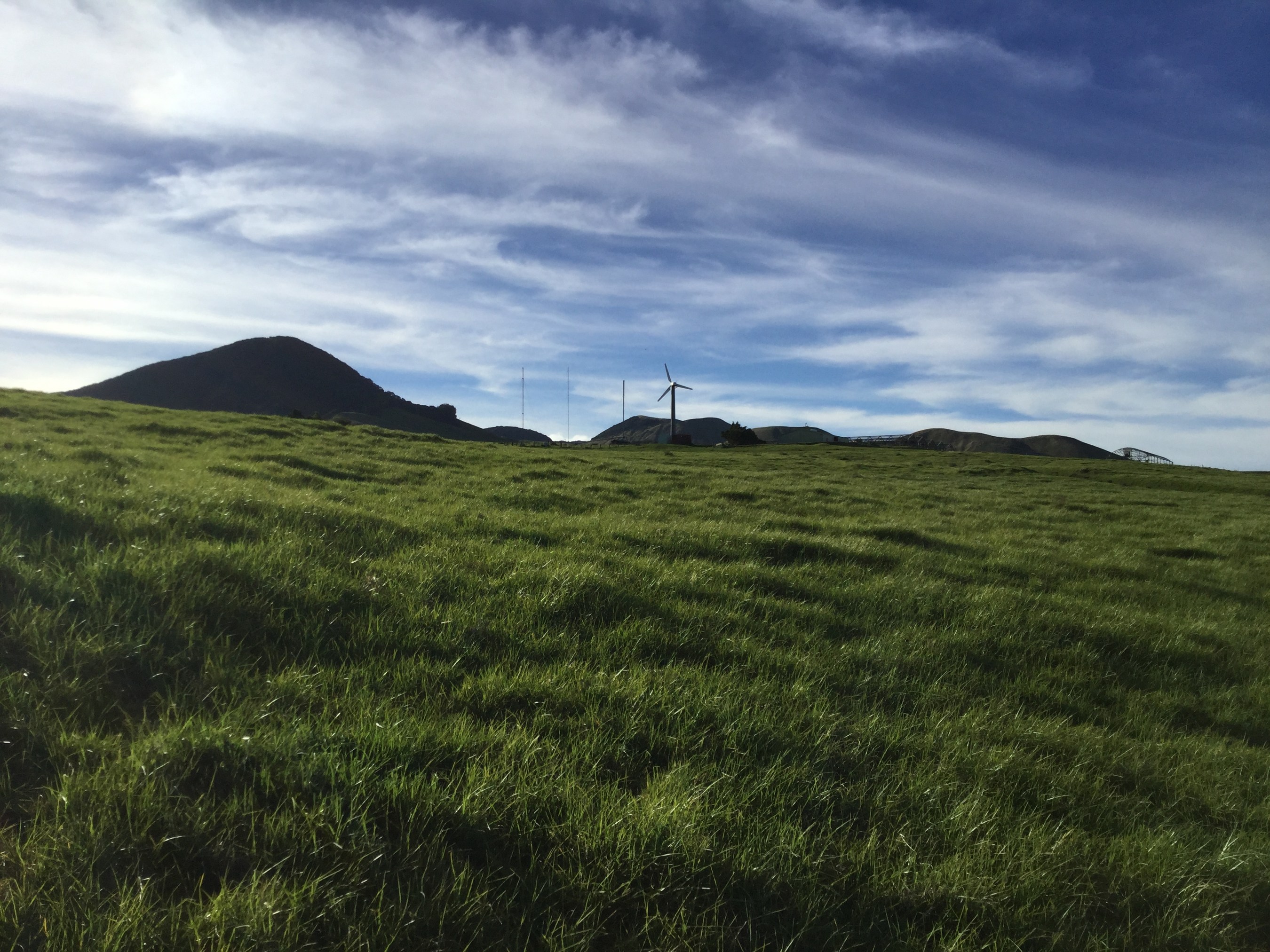 We know most of you know that none of the above is true. And that you're aware the most recent chapter of Kilauea volcano's 35-year-old eruption directly affects only a small portion of east Hawaii Island's Puna district equating 10 square miles of the 4,028-square-mile island. We know you know that, sadly, two-thirds of Hawaii Volcanoes National Park, one of the Earth's most unparalleled natural areas, is, for now, closed to the public due to instability at the Kilauea summit area related to the Puna eruption nine miles away. And we're also aware you might be thinking, "OK, the park's closed. What else can we do and where else can we go on Hawaii Island?"

Along the western coast of the island, four other national park sites largely centered on Hawaiian history and culture await. East side Hilo town is home to tasty multicultural eats and a couple of great interactive science centers exploring Hawaii astronomy and marine life. The Hamakua Coast's rustic offshoot roads reveal hidden rainforests, streams, waterfalls and coastline, while the island's north tip is home to one of Hawaii's most exquisite valleys. From ziplining and kayaking to snorkeling and horseback riding, there are activities galore island-wide, all open for business. There's even lots to see and do in the districts closest to the eruption, Puna and Kau, including a vast yet little-visited section of Hawaii Volcanoes National Park.

So, yes, the island of Hawaii is business-as-usual, safe and open for business, with its wide-open spaces still very much wide open and ready for exploring. You won't accidentally wander anywhere near where the eruption's current fixed-channel, 9-mile lava flow is descending from an upland vent into the sea. And, honestly, it's just a great time to visit.

So where can you go and what can you do on Hawaii Island? Start here.

Hawaiian history and culture, as well as nature in all of its wild diversity, drive the narratives of every one of Hawaii Island's National Park Service-managed parks, sites and trails. • Walk on the restored lava-rock seawall of a centuries-old Hawaiian fishpond – and check out native wetland birds and beach-snoozing honu (Hawaiian green sea turtles) – on the coastal trail of Kaloko-Honokohau National Historical Park. • Puuhonua o Honaunau National Historical Park preserves the structures and landscape of a tranquil oceanfront site that for three centuries provided protection for fugitives who had violated the early Hawaiian kapu system of sacred laws, and all others fleeing death or danger. • A visit to the massive namesake seaside heiau (temple) of Puukohola Heiau National Historic Siteshares the epic history of its 1790 construction on the orders of King Kamehameha the Great, who was told by prophecy that building it would earn him the favor of Hawaiian war god Kukailimoku in all of his battles. • Explore the sights and sounds of the Alakahakai National Historic Trail, a 175-mile island-circling foot trail used by early Hawaiians for traveling between coastal settlements. Restored portions of the scenic trail can be trekked within Kaloko-Honokohau NHP, Puuhonua o Honaunau NHP and Puukohola Heiau NHS. • Finally, while it's true that Hawaii Volcanoes National Park's visitor center and its most-visited Kilauea volcano summit- and coastline-area attractions are, for now, closed indefinitely, folks interested in experiencing the before-and-after landscapes of a volcanic eruption up-close can make plans to explore the park's Kahuku Unit, an hour's drive south of park's main entrance. Open Wednesdays through Sundays, with admission free, Kahuku offers ranger- and self-guided hikes exploring Maunaloa volcano's 1868 lava flow, its post- and pre-lava flow native forests, historic pasturelands, and history of people on the landscape. • On the way to the Kahuku unit from Hilo (or on the way to Hilo after visiting it from Kona), stop in the towns of Volcano (aka Volcano Village) for sit-down meals, fast eats, to-go grinds and more at one of the town's restaurants, drive-ins and general stores, or Naalehu for fresh-made Portuguese sweetbread, stuffed or traditional Portuguese malasadas, bread puddings and lots more baked delights at Punaluu Bake Shop.

You say you want adventure?

Choose from more than a dozen hiking trails managed by the state's Na Ala Hele Hawaii Trail and Access system – from upland rainforest and valley hikes to coastal and mountain treks – scattered throughout the island's diverse landscapes and climate zones. • Experience the workday views of the island's storied paniolo (cowboys and cowgirls) firsthand via a horseback ride on the green rolling hills and rugged working ranches of North Kohala and Waimea, or along the rim of breathtaking Waipio Valley. • With their bounty of stream- and waterfall-carved valleys, and acres of verdant forest, the coastlines of northeast Kohala, Hamakua and north Hilo offer up some of Hawaii's most idyllic landscapes for intrepid zipline enthusiasts. • Explore the island's undersea world at its many marine-life filled snorkel and scuba spots or sign up for a night dive for manta rays and other post-sunset underwater denizens. • A circle-island helicopter tour offers sky views of the vast lava fields of Kilauea, Maunaloa and Maunakea volcanoes, and the emerald amphitheater valleys, rugged sea cliffs and hidden rainforest waterfalls of the Hamakua Coast. • Peer into massive Waipio Valley from its uber-scenic lookout or hike into rain-kissed Pololu Valley from its own similarly scenic overlook. • Or join a tour and snorkel the crystalline waters of marine life conservation area Kealakekua Bay State Historical Park on the island's Kona side.

How about we drop some history, science and culture on you?

Learn about the federally protected waters of the Northwestern Hawaiian Islands' 583,000-square mile Papahanaumokuakea Marine National Monument and see some of its live marine life at the Mokupapapa Discovery Center in Hilo. Bonus: Hawaii Volcanoes National Park rangers are currently stationed at the center for visitors interested in learning about Hawaii's volcanoes and the current Kilauea eruption. • At Imiloa Astronomy Center in Hilo, interactive exhibits dive into early Hawaiian studies of the stars and modern day astronomical studies at the summit of towering (and dormant) Maunakea. • Speaking of, brag that you were at one of the best places in the world for naked-eye stargazing (and atop the tallest mountain in the world when measured base to peak) on a guided tour of Maunakea's summit. • The Kona Coffee Living History Farm offers tours of its still-producing coffee estate first homesteaded in 1900, weaving in interpretive history of the daily lives of early 20th century Japanese immigrant coffee farmers. • Tour the pioneering aquaculture and mariculture activities, sea- and sun-powered renewable energy production, and other high-tech businesses of the Natural Energy Laboratory of Hawaii Authority (NELHA) on the Kona Coast, including a seahorse farm. • A hike into Puako Petroglyph Archaeological Preserve reveals a third of its 3,000 kii pohaku (images in stone) depicting early Hawaiian spiritual and everyday life. • Take in Hilo's Native Hawaiian, immigrant and missionary resident history, and the island's natural history, at Lyman Museum and Mission House. • The ranching town of Waimea is home to a heritage center and real-life ranches ready to share the stories of Hawaii Island's celebrated paniolo and longtime place in U.S. ranching history.

Get lost – figuratively, not literally – in nature.

South of Hawaii Volcanoes National Park, explore the coastline of Punaluu Beach, whose black sands – much-loved by Hawaiian green sea turtles for sunning – are actually fine, sea-worn granules of Kilaueavolcano lava. • Seek out the scenic, multi-length segments of the Old Mamalahoa Highway – once the main road connecting the sugar towns of the island's Hamakua Coast – as they wind through rainforests, over century-old bridges, and past rugged coastline, small towns and old sugar mill remnants. • Help restore native plant life and forests that once dominated the windward, mid-elevation slopes of Maunakea on a seedling-planting mission with the state's Mauna Kea Forest Restoration Project or nonprofit Hawaiian Legacy Reforestation Initiative; or, further downslope, with the Waikoloa Dry Forest Initiative. • Grab your binoculars and trek one, five or all 90 miles of the island-crossing Hawaii Island Coast to Coast Birding Trail on a quest to tick native seaside, mountain and rainforest birds off your been-there-seen-that birding checklist. • Or embark on a waterfall road trip of North Hilo and the Hamakua Coast, beginning with 80-foot Waianuenue (aka Rainbow) Fallsand its sister Wailuku River cascades in Hilo, and continuing with 442-foot Akaka Falls in Honomu and other waterfalls viewable along Highway 19 (aka modern Mamalahoa Highway).

Follow the locals and you'll find great eats in just about every Hawaii Island town – from fresh, farm-and-ranch-to-table dining in Waimea and the resorts of the Kohala Coast, to brew pubs, fresh-catch restaurants, and longtime mom-and-pop eateries in Kailua-Kona, and an array of eclectic small town eateries in Hawi, Honokaa, Pahoa and Volcano Village. • The island's biggest town, Hilo, is an burgeoning food-enthusiast neighborhood in its own right, offering everything from the local-style menus of resident-favorite drive-ins and lunch shops, to fresh-caught fish and multiethnic comfort food, to loco moco, okazuya, poke, mochi and farm-and-farmers-market-to-table cuisine, to inventive bakeries, pizza joints and taquerias. • A number of farmers in Hawaii Island's Kona, Kau and Puna coffee-growing districts offer educational farm tours and tastings of their coffees, while annual java festivals in Kona and Kau celebrate each district's distinct award-winning roasts. • Sample island-produced ambrosial organic honeys, nature-infused with hints of kiawe wood, mac nut, ohia lehuablossom and other floral varieties, at farmers markets or on an actual bee farm tour. • Grapes grown on vines at the 4,000-foot elevation of Kilauea volcano bring unique character to the vintages produced by longtime vintners Volcano Winery. • The twice-weekly downtown Hilo Farmers Market – with its fresh produce, flowers, gourmet culinary products, multiethnic to-go foods, arts and crafts, and fashion – is the island's most well-known outdoor market, but you'll also find awesome Saturday morning farmers markets in Waimea (tip: definitely do breakfast here), and around the island, including Kona, Volcano, Kau, Waikoloa, Hawi and Kapaau. • While perusing the farmers markets, look for jellies, jams, marmalades and other small-batch preserves crafted from specialized fruit varieties – poha berries, lilikoi, mountain apple and more – grown on the island's many micro-orchards.

Travelers planning a trip to the island of Hawaii who have questions regarding Kilauea volcano or air quality can contact the Hawaii Tourism United States Call Center at (800) GO-HAWAII [(800) 464-2924]. For more information, visit www.GoHawaii.com/Island-of-Hawaii.

Food & Drinks
Get Your Scoops On National Ice Cream Day!