Santa Is Ready For Macy's Thanksgiving Day Parade On NBC

A spectacle like no other awaits millions as the 92nd annual Macy’s Thanksgiving Day Parade®, America’s favorite tradition, kicks-off the holiday season. 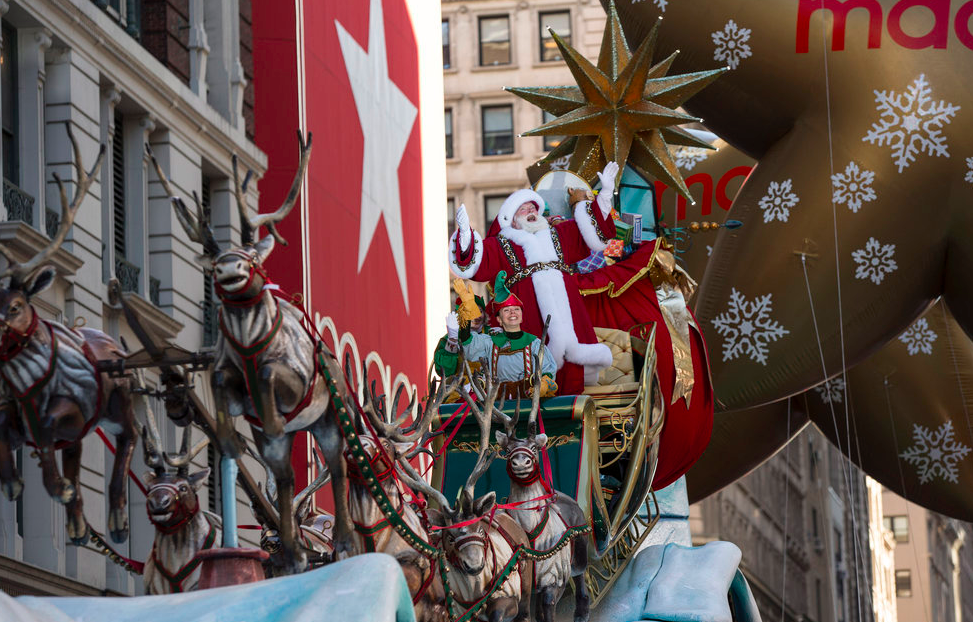 The Macy’s Thanksgiving Day Parade is the nation’s biggest and most anticipated holiday celebration. Millions of families will tune in to watch the excitement unfold on Thursday, Nov. 22 as Savannah Guthrie, Hoda Kotb and Al Roker of NBC’s “Today” host the broadcast from 9 a.m.-noon in all time zones.

Set to march through the streets of New York City on Thanksgiving, the nation will celebrate gathered with family and friends and more than 8,000 volunteers. Dressed as clowns, guiding the flight of larger-than-life character balloons, bringing the beat in the nation’s best marching bands and entertaining the crowds with their show-stopping performances, these participants will inspire and delight the nation. With the time honored phrase “Let’s Have a Parade,” the spectacle begins for more than 3.5 million spectators in New York and more than 50 million television viewers nationwide.

Since 1924, the Macy’s Parade has enthralled the nation and become synonymous with the start of the holiday season. For the 92nd edition, the lineup will feature 16 giant character balloons; 43 novelty balloons, heritage balloons, balloonicles, balloonheads and trycaloons; 26 floats; 1,200 cheerleaders and dancers; more than 1,000 clowns; and 12 marching bands.

“We’re delighted to once again broadcast this extraordinary holiday tradition to viewers across the country,” said Doug Vaughan, Executive Vice President, Special Programs, NBC Entertainment. “The Macy’s Thanksgiving Day Parade marks the beginning of the holiday season, and we’re as excited as ever to celebrate with this incredible lineup of performers, bands, floats, balloons and more.”

The Macy’s Parade is always a unique multi-level, magical march that provides spectators with different experiences, whether they watch it on television with friends and family or scout the perfect spot on the route to watch it unfold live. For the third year, Macy’s, along with NBCUniversal and Verizon, will give viewers an up close and personal second-screen experience of the parade with a 360-degree livestream on Verizon’s YouTube page. The stream will go live a 9 a.m. ET at www.youtube.com/verizon and will run through 12 p.m. ET.

Since 1927, the parade’s signature balloons have featured some of the world’s most beloved characters. Over time, the inflatables have morphed from air-filled characters carried on sticks to high-flying giants, balloonheads and even hybrid inflatables with vehicles inside.

Joining the giant character balloon lineup this year will be the famed Saiyan warrior Goku from Dragon Ball Super: Broly.

The elf stars of The Christmas Chronicles on Netflix – Fleck, Bjorn, Jojo and Hugg – will also debut taking to the skies ahead of the one-and-only Santa Claus. On the ground, the streets of New York will magically transform into the world’s largest bowling lane for the Go Bowling™ balloonicles (hybrid balloons and vehicles), as the bowling ball, pins and shoe cars try for strikes or perhaps a turkey, along the parade route.

Rounding out the new inflatable cast will be Sinclair Oil’s Baby Dino balloonicles, Universal Orlando Resort’s™ The Nutcracker and the shining star of Macy’s Christmas celebrations, Sunny the Snowpal.

Gliding down Manhattan, the parade’s signature floats will transport spectators to worlds of wonder through creative design and skillful construction. Conceived and crafted by the incredible artisans of Macy’s Parade Studio, which include carpenters, engineers, electricians, painters, animators, sculptors, metal fabricators, scenic and costume designers, this year’s lineup of floats sets an unparalleled stage for entertainment. Macy’s Parade floats are often three stories tall and several lanes of traffic wide, but must collapse to no more than 12½-feet tall and 8-feet wide in order to travel safely from the New Jersey home of the Parade Studio, to the Manhattan starting line via the Lincoln Tunnel each Thanksgiving eve.

Returning for a second year is a special float that will commemorate the season through an original holiday song celebrating togetherness and the magic of believing. The Macy’s Singing Christmas Tree by Delta Air Lines will feature the voices of more than 100 Macy’s colleagues and friends from Delta hailing from across the nation and the world.

STRIKE UP THE BAND AND DANCE

Rounding out the live entertainment are the parade’s signature large performance groups. Joining the lineup this year are the teen dancers and cheerleaders of Spirit of America Dance Stars and Spirit of America Cheer. These groups together feature more than 1,100 of the very best performers recruited from hometowns nationwide. Days before Thanksgiving, they will gather for the first time in New York City to rehearse their numbers as a group, ahead of their once-in-a-lifetime national spotlight. Adding a little glamour to the dancefloor will be the Fred Astaire Dance Studios, a specialty group made up of 60 ballroom dancers, and bringing wacky fun will be the stars of the Big Apple Circus. Finally, joining select talent performances will be the Manhattan Youth Ballet, and Westchester Dance Artists.

Please note: All talent, performances, elements and information included are subject to change.