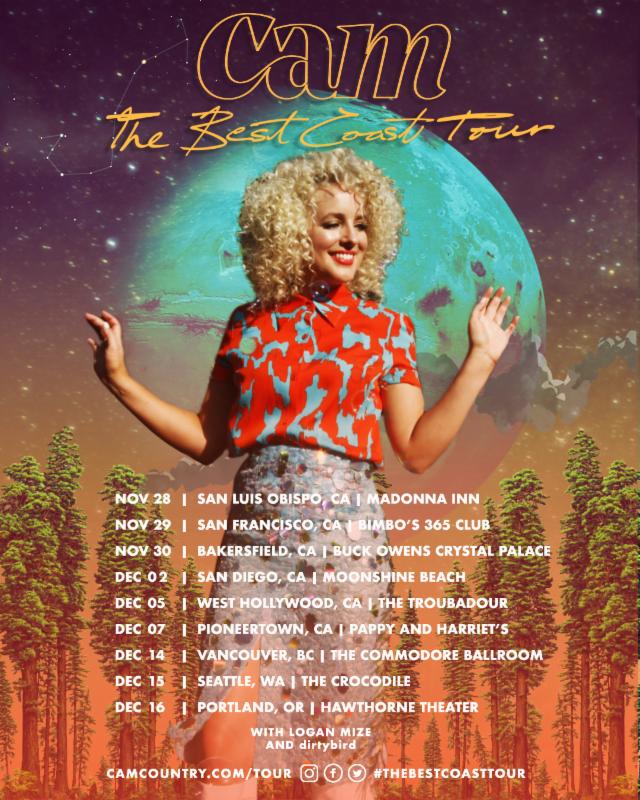 Grammy® Award nominated Country singer/songwriter, Cam today announced her fall headlining Best Coast Tour featuring opening act, Logan Mize. The tour kicks off on November 28th at the iconic Madonna Inn in San Luis Obispo, CA. The Inn created by Alex Madonna is known for it's lavish and uniquely designed rooms and the scenic outdoor venue provides the perfect backdrop to kick off the tour and show that the West Coast is the "Best Coast". Always cognizant of the visual side of her art, audiences will also see an original commissioned LED structure onstage crafted by the Bay Area company, Sheet Metal Alchemist.

Appropriately, the tour will include stops up the West Coast of the US, including one date in Canada and wraps on December 16th at the Hawthorne Theater in Portland, OR. Tickets for the tour go on sale this Friday, September 29th and will be available at CamCountry.com. The Best Coast Tour marks Cam's first headlining run since her Fall of 2016 sold out Burning House Tour. A complete list of Best Coast Tour live dates can be found below.

"I'm coming home to tour the West Coast!!", says Cam, "I've picked some of the cutest & quirkiest venues, I've built a crazy visual set, and I even get to play new music from the upcoming album!! Obviously I'm going all out for the VIP experience too, to take care of the Best Coast that raised me. I'm so proud to come home and show off what I've created."

2017 has been a busy year for Cam who has performed at several festivals at home and abroad to include Stagecoach, Country Summer Festival, Country Thunder USA, C2C and also stops in  London, Dublin and Glasgow and a Bush Hall headline show in London. Cam was also confirmed as support for the legendary George Strait's residency concert series throughout the year in Las Vegas, NV, "Strait to Vegas", at the T-Mobile Arena. There are two remaining dates, December 8th and December 9th. Tickets for these shows can be purchased HERE.

On Monday September 25th, Cam was asked by Harry Styles to open for him on his first solo Nashville, TN date at the Ryman Auditorium. Cam is currently in the studio working on her highly anticipated sophomore album, to be released in 2018.

Music
The 80's Are Alive & Well: Bananarama Are Back On Tour!