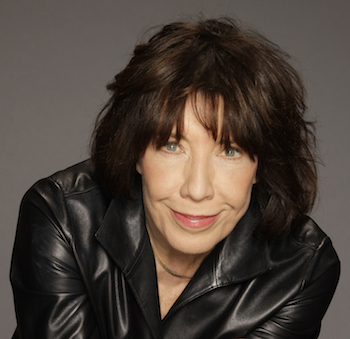 Lily Tomlin has been named the 53rd recipient of SAG-AFTRA's highest tribute: the SAG Life Achievement Award for career achievement and humanitarian accomplishment. Tomlin will be presented the performers union's most prestigious distinction at the 23rd Annual Screen Actors Guild Awards®, which will be simulcast live nationwide on TNT and TBS on Sunday, Jan. 29, 2017 at 8 p.m. (ET), 7 p.m. (CT), 6 p.m. (MT) and 5 p.m. (PT).

That Tomlin embodies the SAG Life Achievement Award’s "finest ideals of the acting profession" is amply celebrated by these and her numerous other professional and philanthropic commendations.In making the announcement, SAG-AFTRA President Gabrielle Carteris said, “Lily Tomlin is an extraordinary actress, as equally adept at narrative drama as in comedy roles. But it is through her many original characters that Lily’s creative genius fully shines. She has an ability to create diverse and distinct characters that are at once familiar, eccentric and oh so honest – in a way that illuminates life’s hidden corners. From Edith Ann to Frankie, her characters are wholly unique, and by exposing every nuance of human behavior they widen our scope of understanding. On behalf of nearly 160,000 SAG-AFTRA members, we are honored to bestow our SAG Life Achievement Award on the truly amazing Lily Tomlin.”

Film
Movie Review: ‘The Secret Life of Pets’ Is An Ode To Our Furry Besties