Movie Review: ‘Triple 9’ is a Thrilling But Implausible Heist Flick 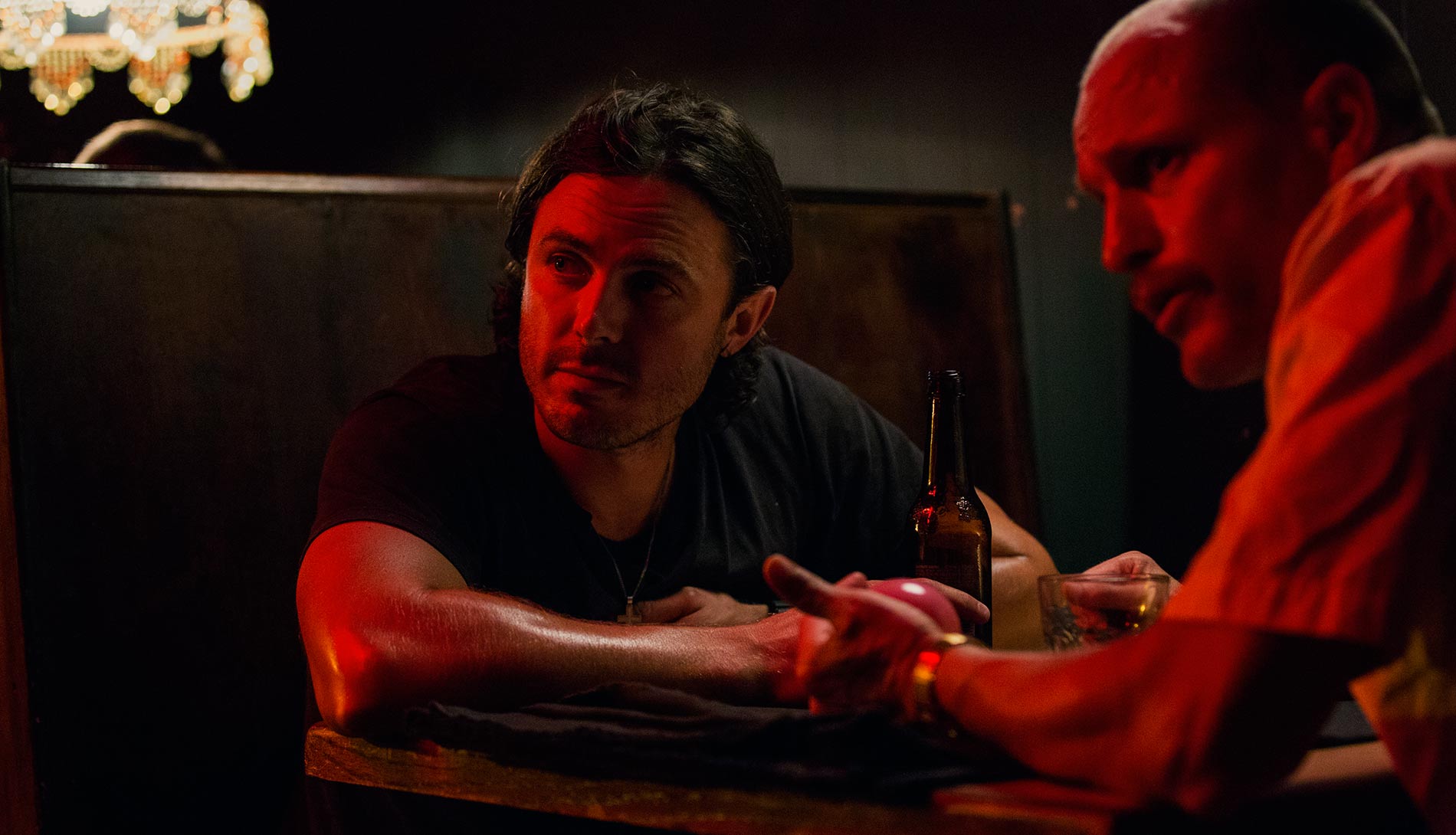 A band of crooked cops and ex-commandos must pull off one last heist to get out of debt with a ruthless Russian-Israeli gangster in “Triple 9,” a suspenseful but minor heist thriller starring Casey Affleck, Chiwetel Ejiofor, Anthony Mackie, Aaron Paul, Woody Harrelson and Kate Winslet.

Directed by celebrated Australian filmmaker John Hillcoat (“Lawless”) from a promising if imperfect debut script by Matt Cook, this tense thriller about dirty cops and dirty money may possess too many double-crosses and unlikely coincidences for its own good, but will still satisfy the action requirements of genre fans. Beyond an admittedly catchy premise working in its favor, the deep ensemble cast should help considerably in adding to the film’s mainstream appeal. However, given the sprawling storyline and the writer’s admirable but ultimately misguided desire to neatly tie together all loose ends, the script strains credibility many times along its journey toward a breathtaking climax.

Set in Atlanta, “Triple 9” centers on Michael Atwood (Chiwetel Ejiofor), the ringleader of a crew who uses military tactics to pull off sophisticated schemes. When we first meet Michael and his sticky-fingered associates – including brothers Gabe and Russel Welch (Aaron Paul and Norman Reedus), Marcus Belmont (Anthony Mackie) and Jorge Rodriguez (Clifton Collins Jr.) – they’re in the midst of an intricate bank robbery that goes terribly awry. After the moneybags explode on the freeway, a wild police chase and subsequent gunfight ensues. Thinking they’ve escaped in the clear, the gang’s good luck proves too good to be true when Irina (Kate Winslet), a Russian-Israeli gangster, decides to blackmail the crew into pulling off an even bigger heist. 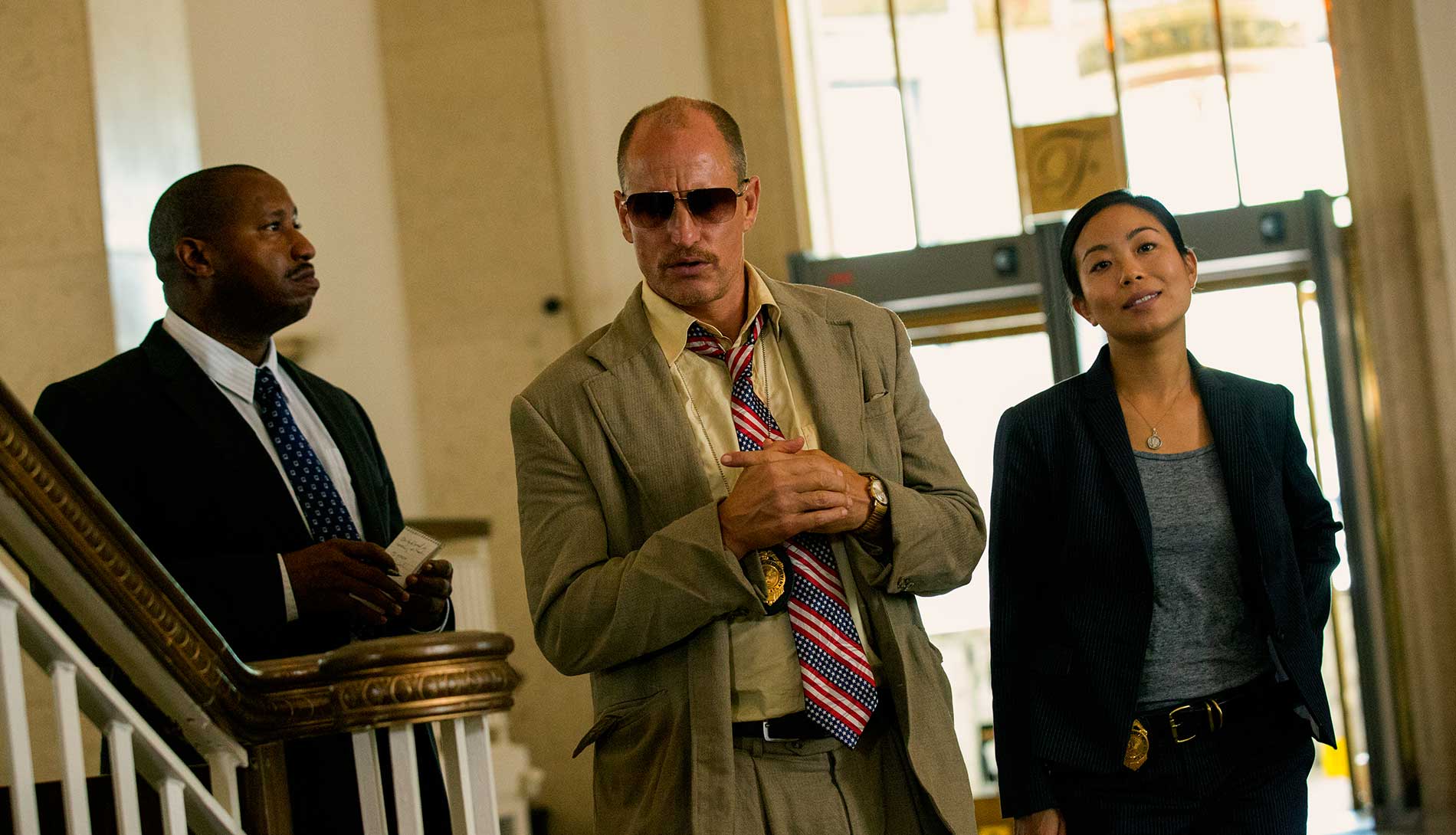 While Michael and his accomplices concoct a plan for their next seemingly impossible robbery, Marcus returns to his inner city beat, where he’s paired up with Chris Allen (Casey Affleck), a straight-edged cop whose uncle (Woody Harrelson) just so happens to be the lead investigator of the bank heist. In the process of designing the perfect robbery, one of their crewmates winds up dead, Marcus and Chris get in way over their heads in a beef with a Mexican gang, and Michael’s family is threatened by Irina and her goon squad.

As the walls close in on the crew as they attempt to execute their perilous plan, they’re forced to create the ultimate diversion: a 999, which is police code for an officer wounded on-duty.

As director John Hillcoat has demonstrated in such previous films as “Lawless,” “The Road” and “The Proposition,” he can stage adrenaline-charging action scenes with the best of them, and his talent in this arena is on full display in “Triple 9.” Action highlights include: the nail-biting bank robbery that sets the action in motion; an explosive gunfight set in a housing project; and a climactic warehouse standoff that capitalizes on the double-dealing nature of the premise. As for Matt Cook’s script, although he’s crafted a scrappy little heist picture with great dialogue and morally flawed characters, convolutions abound, introducing unnecessary complexity to the plot at nearly every turn.

Plot problems aside, “Triple 9” is blessed with a star-studded ensemble cast who help sell the material even when the logic doesn’t add up. Standouts include Casey Affleck as the untested beat cop finally getting a taste of the action; Anthony Mackie as a backstabbing brother in blue; and most notably, Woody Harrelson as a pot-smoking veteran investigator hot on the gang’s trail. Less successful in their portrayals are Aaron Paul, who sports a haircut so distracting it nearly torpedoes his entire performance; and Kate Winslet as the coercive Irina, whose presence has the unmistakable air of stunt casting.

Far from a perfect film, “Triple 9” nonetheless is enough of an action-packed diversion to justify a trip to the theater.

Rated R for strong violence and language throughout, drug use and some nudity.

Film
Movie Review: ‘My Big Fat Greek Wedding 2’ Is Not Worth Waiting For