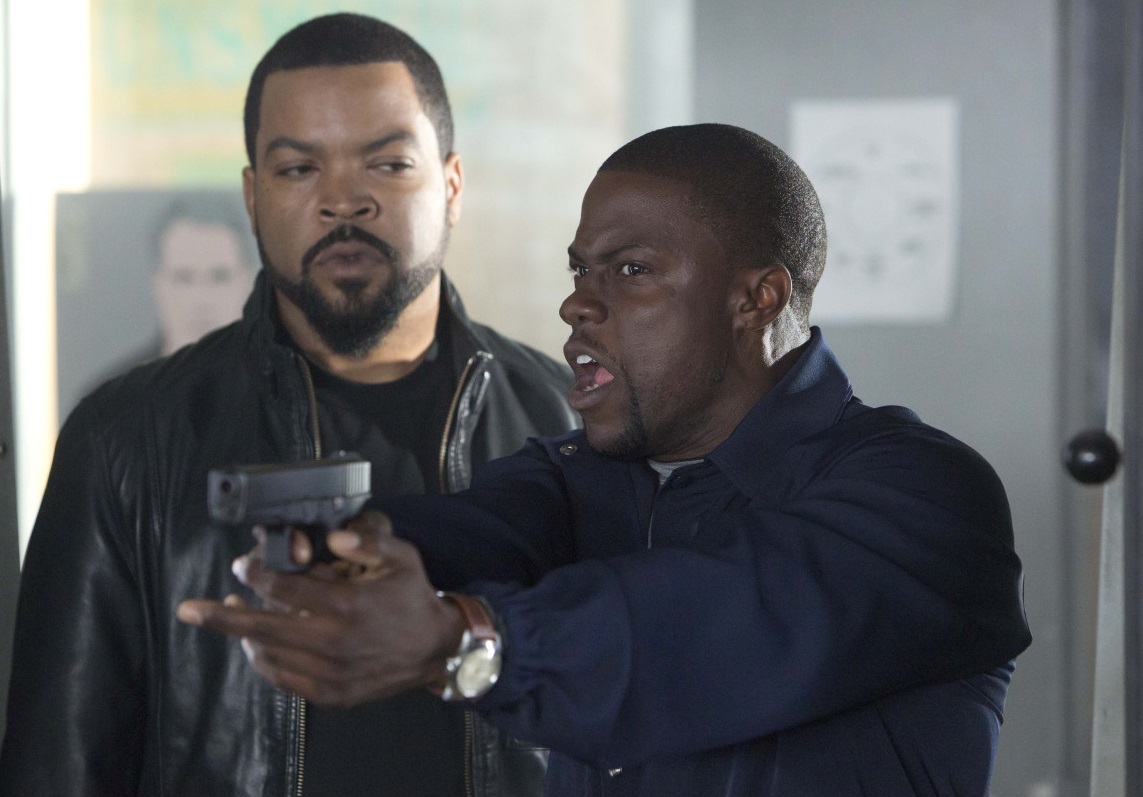 After a breakout first outing, the 'brothers-in-law' are back serving and protecting again in “Ride Along 2.” Shifting the action from the streets of Atlanta to the beaches of Miami, original stars Ice Cube and Kevin Hart once again team up for a buddy-cop comedy that desperately tries to prove to the audience that the genre hasn’t already reached saturation point. Sadly, where the original barely squeaked by on Kevin Hart’s ridiculous motor-mouthing antics, director Tim Story’s (Fantastic Four) sequel crashes and burns faster than a Nascar Sprint Cup Car slamming into a wall at 200 mph. In the legal sense of the word “Ride Along 2” isn’t quite plagiarism, but there is enough reused material in this 100 minute clunker to make you think that you’re on the couch watching the FX movie of the week instead of at the movie theater paying $20 for a small popcorn.

Just like countless others before it, “Ride Along 2” settles for a cold open to start off the film. There’s a requisite car chase, some drug dealers, a couple of explosions, and even a special cameo from “Fast and Furious” actor Tyrese Gibson. None of the action or comedy quite hits its mark, but hey, it’s only the first five minutes of the film so it’s pretty easy to just roll with it, in hopes of better things to come. Unfortunately, this is as good as it ever gets.

The action quickly segues to Ice Cube’s character, James, who begrudgingly agrees to bring his soon to be brother-in-law Ben (Hart) to Miami with him to help — and I use the word “help” loosely. The real impetus of Hart’s journey, however, is to give his soon to be wife (Tike Sumpter) enough time to plan the perfect wedding. 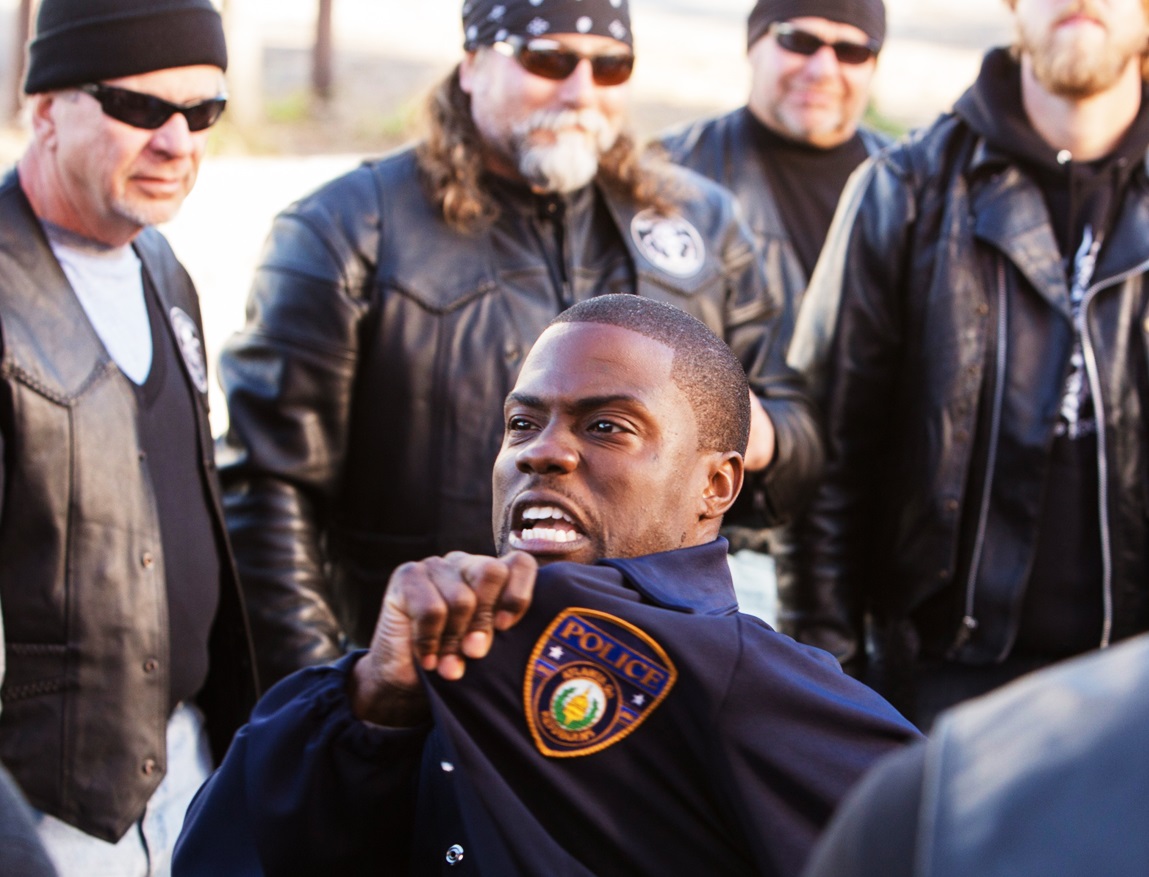 Beyond the gorgeous South Beach scenery, Miami doesn’t actually offer much in the sense of variety when it comes to a shift away from the film’s original Atlanta setting. Once on scene, we watch Ben and James track down and question a hacker — played by “Hangover” alum Ken Jeong — about his relationship with a nasty crime organization. To help navigate this new city, James and Ben enlist the help of local cop Maya Cruz (Olivia Munn). Soon enough the trio is led to the biggest drug syndicate movie-goers have ever seen… this year.

When it comes to the two cops leading the charge, neither Cube nor Hart seem to be playing their role with as much gumption as their first outing together. Cube, always the expert at playing it straight, never really opens up enough on screen to showcase his comedic side. Sure, this is intended on his part as he is supposed to be playing the hardened detective to Hart’s crazy police academy tomfoolery. Yet, Cube’s standoffish performance ultimately comes off as apathetic rather than intentional. Who knows, maybe the actor was aready dreaming about his big Coachella debut way back when this film was being shot.

As far as Hart’s efforts on screen, the actor definitely takes advantage of the many, many “foot chases” (as his character repeatedly refers to it) that take place throughout the film. “Barbershop” director Tim Story is more of a comedy director than an action one, but the smaller scale of a good ol’ fashioned street chase comes in handy for both director and star. These sequences showcase Hart’s comic strength as a physical comedian rather than a verbal one. Sure, his word-vomit style of spewing his dialogue might get the most screen time, but it is the slapstick stuff that gets the few laughs the script offers. 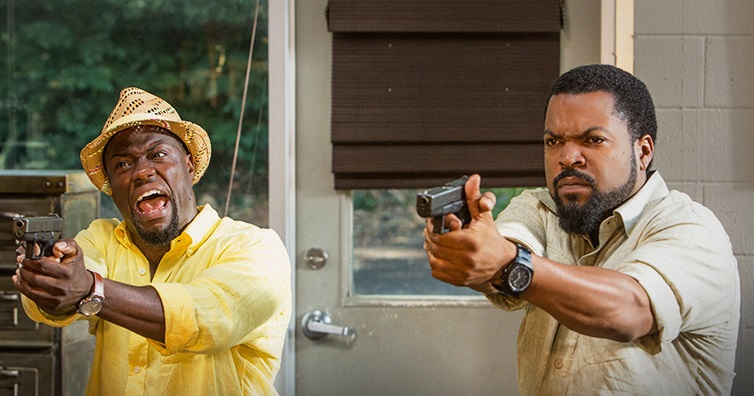 Screenwriters Phil Hay (R.I.P.D.) and Matt Manfredi (Clash of the Titans) at least add in some interesting new characters to complement all of Cube and Hart’s bickering. Jeong manages some funny moments as a goofball hacker that ends up helping James and Ben track down the central drug lord. Olivia Munn (TV’s The Newsroom) —  acting as a complete female equivalent to Cube’s tough guy persona — is enjoyable as well.

As the film barrels along, the cop comedy cliché checklist continues to fill up. Despite a few blips of life from Hart and Cube’s once strong relationship in the 2014 original, this sad sequel proves to be nothing more than a drinking game in-the-making for frat boys looking to get loaded off of watching yet another wannabe “Lethal Weapon.”

Rated PG-13 for sequences of violence, sexual content, language and some drug material