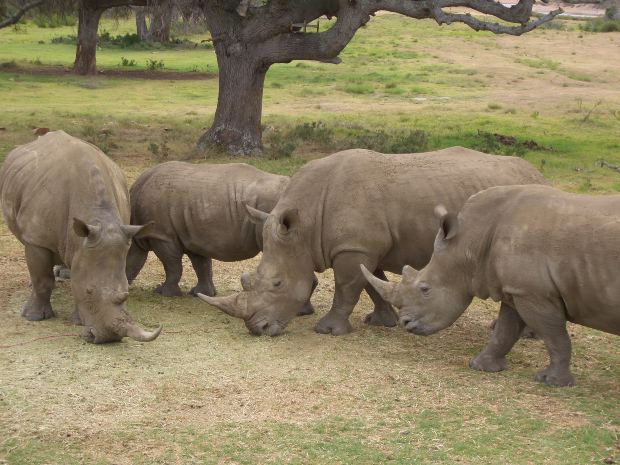 When the art cards were raised in unison, they formed a 60- by 44-foot drawing of Nola, the Safari Park’s beloved northern white rhino—one of only four of this species remaining on the planet.

World Rhino Day is celebrated internationally on Sept. 22 each year, to raise awareness of the five species of rhinos in the world: black, white, greater one-horned, Sumatran and Javan. World Rhino Day activities at the Safari Park included the Nola sky art; special rhino-themed enrichments for many of the Safari Park’s animals; and a rhino conservation pledge and coloring activity.

To date, a total of 93 southern white rhinos, 68 greater one-horned rhinos and 14 black rhinos have been born at the San Diego Zoo Safari Park. To further its commitment to rhino conservation, San Diego Zoo Global is building a Rhino Rescue Center at the Safari Park to house more southern white rhinos, establishing the Safari Park as a sanctuary to protect these rhinos and their offspring—at a time when an average of three rhinos are killed each day in the wild by poachers. Taking a science-based approach, researchers at the San Diego Zoo Institute for Conservation Research, along with collaborators, are also developing reproductive techniques necessary to preserve the genetics of the critically endangered northern white rhino and all rhino species.