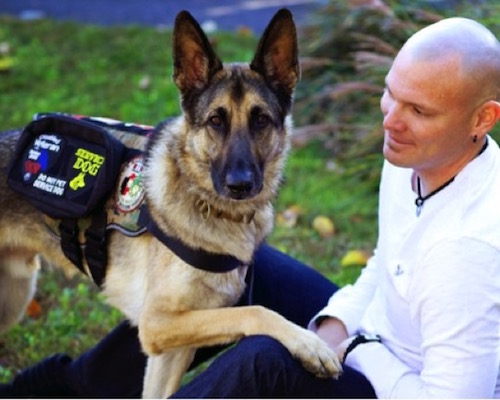 Axel, a heroic service dog that saved the life of one of our nation's brave warriors and had just been named Service Dog of the Year at the American Humane Association Hero Dog Awards, was denied permission to accompany Captain Jason Haag as they were about to board the airplane for home.

Five years ago, now-retired Marines Captain Jason Haag from Fredericksburg, Virginia, was diagnosed with post-traumatic stress and traumatic brain injury after returning from two combat tours in the Middle East. When he finally made it home, he was in a constant state of severe depression and mental agony. He struggled with alcohol abuse and took more than 30 medications to deal with his debilitating symptoms.

In 2012, his wife urged him to reach out to K9s for Warriors, an organization that provides veterans with service canines, which is how he met who he calls his "lifesaver," a German shepherd named Axel. Day in and day out, Axel is by his side, ensuring that he is in a constant state of peace and not fear. Other times, Axel goes into full activation mode, using his training to remove Captain Haag from an environment when a severe panic attack has begun. When he met Axel, the dog was one week away from being put down, sleeping on a shelter floor while Captain Haag was sleeping in his basement with a gun under his pillow. Now he shares a bed with his "big, furry security blanket."

Axel had a harness and vest clearly identifying him as a service dog, and the airline was given credible verbal assurance at the time a boarding pass was issued.  At the time of boarding however, an American Airlines representative began to ask additional questions, including questions about his disability and demanding additional documentation.  An airline representative later stated to American Humane Association's legal counsel that Capt. Haag needed to have a medical alert card, which is not in fact a requirement

American Airlines issued an apology today, and American Humane Association is calling on them and all airlines to better train their staff to meet the needs of our nation's brave veterans and others who require the help of a service animal. There should be no room and zero tolerance for discrimination against these heroes.

"Service animals are absolutely essential to so many people who struggle with emotional and physical challenges," said Dr. Robin Ganzert, president and CEO of American Humane Association. "While airlines certainly have the right to maintain appropriate protocols, these should not and cannot prevent life-enhancing and life-saving service animals from accompanying the people who so greatly need them. In this case, the airline did not even follow its own guidelines. We call upon the company to reimburse the costs endured by Captain Haag in the course of this regrettable action, and on all airlines to better train their staff."

Lifestyle
Caring For Your Elderly Dog: The Essentials

FYI
Breast Cancer Awareness: New Studies On When To Get A Mammogram