Giving The Gift Of Pizza & Smiles To Children Charities 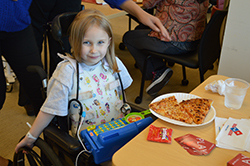 Yes, http://www.americanpizzacommunity.com is actually a thing! Pizzerias everywhere are celebrating the upcoming National Cheese Pizza Day onSeptember 5th with the delivery of pies this week to children's and local charities in communities around the country.  Knowing that a slice of pizza can brighten anyone's day, members of the American Pizza Community wanted to salute the commemorative holiday by sharing the communal love of pizza with children and local communities. According to the pizza industry, pizza ranks as the top meal choice among kids year after year.

Other pizza companies taking part in National Cheese Pizza Day celebrations with pizza donations in other communities include:

More than 5 billion pizzas are sold each year and cheese pizza remains the leading pizza type in menu mentions, according to the 2014 Pizza Power State of the Industry report by PMQ Magazine.

Giving Back
Join The NO KID HUNGRY Campaign This September