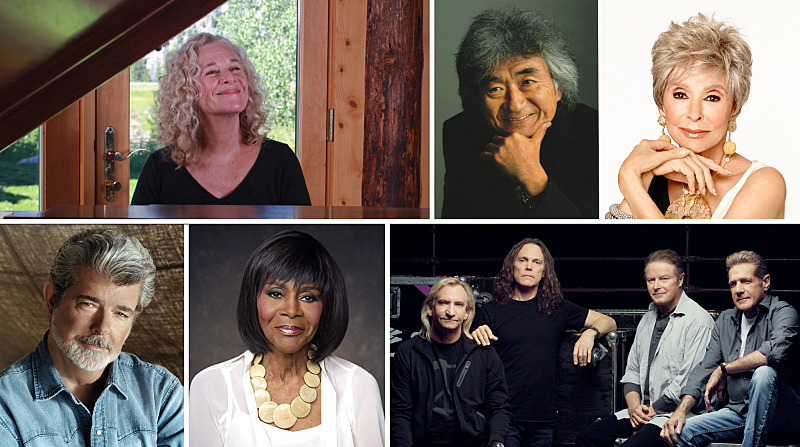 “The Kennedy Center Honors recognizes the extraordinary and unparalleled talents of individuals whose impact and genius have left an indelible mark on civilization,” stated Kennedy Center Chairman David M. Rubenstein. “Quite simply, our Honorees represent the voices, soundtracks and stories of our personal lives and memories.  The music of the Eagles has endured as the quintessential American rock and roll sound for generations; Carole King’s heartfelt lyrics and tunes are woven throughout the tapestry of American music; George Lucas’ films have enriched our world with stories of epic adventure; Rita Moreno’s iconic spitfire roles are embedded in the heart of American culture; Seiji Ozawa’s artistic leadership as a conductor has set a new standard for orchestras around the world; and Cicely Tyson’s range of strong female roles on stage and screen have broken boundaries for women of color.”

“When I look at this year’s outstanding slate of Honorees, I am struck by a powerful common theme – artists as history-makers, artists who defy both convention and category,” commented Kennedy Center President Deborah F. Rutter. “Each Honoree and their career-spanning achievements exemplify a rare quality of artistic bravery. They have pushed the limits of their gifts as musicians, actors and storytellers to inspire generations of Americans and those around the world. Their individual paths to excellence are inspirational and their contributions to the fabric of American culture are equally permanent and timeless.”

In a star-studded celebration on the Kennedy Center Opera House stage, the 2015 Honorees will be saluted by great performers from Hollywood and the arts capitals of the world. Seated with President and Mrs. Obama, the Honorees will accept the thanks of their peers and fans through performances and heartfelt tributes.